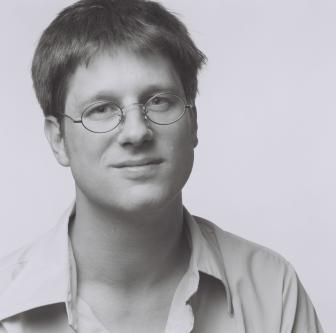 (Germany, 1971)
© Pieter Vandermeer - Tineke de Lange
Biography
Jan Wagner was born in Hamburg in 1971 and lives in Berlin. He studied English at the University of Hamburg, at Trinity College, Dublin, and at Humboldt University, Berlin, where he wrote his master’s thesis about the latest generation of English-Irish poets. Wagner is a poet, essayist, critic (for the Frankfurter Rundschau among others), editor and translator of English poetry (by Charles Simic, James Tate and Simon Armitage, to name but a few). His poems have appeared in a variety of literary journals and are included in numerous anthologies. His debut collection of poems was published in 2001. In 2014, he was the first ever poet to receive the Leipzig Book Fair Award for his collection Regentonnenvariationen [Variations on a Rain Barrel].
'I like to write about small, apparently banal objects: a nail, a cake of soap, things you can easily miss, but which in the poem, suddenly release great forces and make the abstract comprehensible and tangible,' Wagner has said in an interview.

A poem by Jan Wagner is a world in itself, a miniature. You keep on looking, at the garden overgrown with ground elder, at the three donkeys behind the fence, at the car slowly getting snowed in. And while you are looking, you feel your perspective shift, you see more dimensions, you become aware of the essence of the subject. In most cases, his starting point is concrete: a mole, silver thistles, but, ultimately, a poem about koalas, for example, is about quietening down, and an essay about sheets may encompass death.

Wagner’s poems bristle with surprising images: the banyan which ‘archives what used to be, as emptiness’, the otter which ‘slips back into its own mirror image’, and the often magnificent concluding sentences (in German here): ‘und sich bei ihr die jalousien senken’, ‘und wirklich sichtbar erst mit dem verschwinden’. The poems are also extremely musical: you hear the melody of the vowels, the instances of assonance and alliteration, the middle and end rhyme, and you hear the rhythm which is different in each poem, never strict and always playful.

Wagner varies between a 'free' form, a self-chosen scheme for rhyme or rhythm, or a fixed classical verse form such as the sonnet or the rondel. There is no one who masters these forms like he does. At key moments, he knows whether the poem he is working on demands a particular form: 'this isn’t about forms that must be filled; this is about using the form to let the poem fulfil itself'. Meanwhile, as he continues to play with such structures, he undermines them, and looks for escape routes, just as he does with rhyme. Wagner likes to use 'dirty' or 'lopsided' rhyme, for example, where German 'geräusch' rhymes with 'garage', 'schuld' with 'feld' and even 'watte' with 'water- / loo', since the possibilities for this sort of rhyme are endless.

Jan Wagner: ‘No, a poem will not change the world – but in itself, it is already an astonishingly changed world, which you can choose to enter or not. If you don’t, you will remain stuck in the traditional, but if you dare to take the plunge, you will receive a rich reward: on a few square centimetres of printed paper, you will encounter an immense space where things which are far apart in terms of time, geography and meaning will be joined together, where the most contradictory objects and paradoxes will come together’. (from the afterword by translator Ria van Hengel in the Dutch translation of Regentonnenvariationen, entitled Regentonvariaties, in 2016).

SELF-PORTRAIT WITH A SWARM OF BEES

REQUIEM FOR A HAIRDRESSER