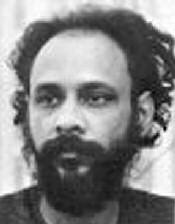 (India, 1954)
Biography
Joy Goswami is regarded as one of the finest poets in the ‘post-Jibananda Das era’ of Bengali poetry. He is the author of twenty-five collections of poetry, ten novels (one of which is in verse), and a book of critical essays. He is also assistant editor of the important literary periodical, Desh, and is in charge of the poetry section. Stylistically innovative, sensuous and imagistic, his poetry shot to prominence in the 1970s. Goswami has won numerous awards, including the Ananda Puraskar (in 1990 and 1998) as well as the Sahitya Akademi Award in 2000. However, he remains wary of such recognition and the false sense of entitlement it can bring. “When I return to my writing table,” he says, “no award will help me pen my thoughts.”
Joy Goswami was born in Kolkata and moved with his family at the age of 5 to Ranaghat, a distant suburb of the city. His father died when Goswami was just 8 years old, and his mother (who was the principal of a school) was to remain a vital presence in his life until her death in 1984. After completing his high school education in Ranaghat, he gave up formal education altogether.

At the age of 19, his poems were published simultaneously in three little magazines. In the next decade, his poems were to appear in several influential literary journals. In 1976 he started writing for Desh Patrika, an important literary magazine in Kolkata. His first collection of poetry, Christmas o Sheeter Sonnetguchcho (Sonnets of Christmas and Winter), was published when he was 23. After thirty years in Ranaghat, Goswami returned to Kolkata where he has continued to live ever since. In 2001, he was a participant at the International Writing Program of the University of Iowa through the US Department of State.

Once in the course of an interview, Goswami offered a fascinating biographical insight into the centrality of the image in his work. He recalled that he regularly maintained a journal as an introverted young boy. However, one day his brother happened to chance on one of these diaries and read his poems aloud to his friends. Deeply humiliated, the young poet decided to give up writing. On reflection, however, he resolved to continue, but in a manner designed to perplex any snooping sibling. “There was this simultaneous process of trying to give vent to my thoughts as well as an attitude of trying to hide what I was trying to express. That is what I would call the birth of metaphor.”

Goswami nurses no delusions about transforming the world with his poetry. “Will my poetry be able to change the world ravaged by the Gujarat riots?” he asks rhetorically. “My daughter once told me that she was becoming cruel . . . I just managed to stroke her hair. I knew my reaction wouldn’t help her be less cruel. My poems, like my strokes, . . . can only console, but not cure.”

The poems selected for this edition of the India domain are from Goswami’s book, Surjo-Pora Chhai (Ashen Sun). They have been translated by short fiction writer and poet, Sampurna Chattarji. Goswami acknowledges (in the accompanying interview) that the genesis of the book was a state of “terrible depression”. “The year was 1999. A lot was going on that was affecting me. The Kargil war, Kosovo, images of millions of refugees fleeing . . .”

The poems invoke a landscape that is mysterious, anguished and visionary all at once. The reader grows progressively aware of a sense of visceral unease, and is inclined to believe Goswami when he says that the book “took three months to write, from my fleeing-thinking stage to the final penning-down stage. I put it away and 6 months later, when I submitted my manuscript to the publishers, I found that I had been cured.”

Capable only of consolation, not cure?

Evidently, Goswami’s poetry is capable of much more than he had once modestly envisaged.
© Arundhathi Subramaniam
Also on this site
{id="2699" title="The Word as Sanctuary"}
Interview with Joy Goswami by Sampurna Chattarji.


Links
In English
The South Asian Literary Recordings Project
Biographical sketch and photo of Joy Gowsami, as well as readings of his work.

Bengal on the Net.com
Bio profile of Joy Goswami by Arindam Roy.

Parabas.com
Six poems by Joy Goswami, translated by Skye Lavin and the poet.

The Little Magazine.com
‘A Poem for the iron falcon’ by Joy Goswami (translated by Chitralekha Basu).

The Hindu Business Line
Short report on Sony’s distribution of a Bengali film based on Joy Goswami’s novel.

MA COMES AND STANDS A DREAM-DEAD PEACOCK, MOON A MOUND OF EARTH A HEART WARS MARCH INTO THE PAST THEY ARE THE ASHEN ONES. THEY ARE THE EXTINGUISHED.
Poems
Poems of Joy Goswami

A MOUND OF EARTH A HEART

WARS MARCH INTO THE PAST

THERE’S A BRIDGE ON THE ROAD – NO WATER – JUST SAND

THE HEAT PRISES OPEN MY EYES. PUSHING AWAY A LAYER

OUT THE HULL OF THE BOAT FALLS THE SCULL

ON THE ROOF A SENSELESS CHILD. GROWING LONG

I HAVE BROUGHT THE SACRIFICIAL GOAT