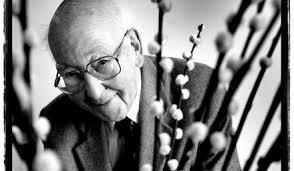 (Belgium, 1921)
Biography
Albert Bontridder is an architect and poet. He was on the editorial team for the innovative magazine Tijd en Mens, which played an important role in the introduction of modernism into poetry and literature in Flanders. In 1951, he debuted in French with the collection Poésie se brise (Poetry is breaking) and in Dutch with the collection Hoog water (High tide). His breakthrough came in 1955, with his socially-committed poems about Willie McGee in Dood hout (Dead wood). 1973 saw the publication of his first collection of poetry Gedichten 1942-1972 (Poems 1942-1972).

His verbose, experimental writing – full of surprising images and dumbfounding comparisons – is pervaded by social and ethical issues. He dedicated a collection of poems to the Prague Spring and resistance to authority. The problematised father figure, as the traditional representative of power and authority, appears regularly in his work. His work is currently enjoying a revival in Flanders, and when (former Central Editor) Megen Molé asked me to choose a poet who had appeared at the Poetry International Festival but still had no entry on the Poetry International Web, the choice was simple.

In the collection Wonen in de vloed (Living in a state of flux), Bontridder reflects on what architecture and poetry have meant to him throughout his life. The poems are considerations, viewpoints and reflections on a number of buildings that he also sketches in the book. This makes many of the poems in this collection concrete and clear. This poet is aware than living in a house, call it the house of poetry, offers more security than not being at home in time. Aptly, the collection opens with a quote from Rilke: ‘Das ist die Sehnsucht: wohnen im Gewoge / und keine Heimat haben in der Zeit . . . ’ (That's what longing is: to live in a state of flux and have no homeland in the world of Time), which also provides him with the title for the collection.
© Patrick Peeters (Translated by Rosalind Buck)
Selected bibliography