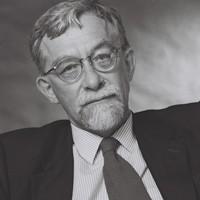 (Sweden, 1936 - 2016)
© Pieter van der Meer
Biography
Lars Gustafsson, born in Västerås in 1936, has always been something of an outsider in Swedish literature. He obtained a doctorate in philosophy when he was twenty-five and has maintained a keen interest in scientific subjects. In his novels and his poetry he explores territories one would not normally expect a literary writer to venture into.
Lars Gustafsson has never tried to appear more important as a poet or novelist by including scientific information in his writings; from the very start he has – especially in his poetry – investigated the question to what extent the scientific world view (in particular that of physics) could provide a new starting point for the writing of poetry, a starting point which could replace traditional symbolist poetics. This inquiry makes him a ‘mathematical lyricist’, a new kind of poet, the only one of his kind.
Already in his very first collection Ballongfararna (The balloonists) from 1962, there appears the image of a machine which does not tolerate being seen. The world as machine is a typically nineteenth-century metaphor, and the world as invisible machine is the successor of that metaphor in the twentieth.
In Gustafsson’s poetry the role of man is reduced to that of a passionate observer who knows that the visible world continues outside his sensory perception in a ‘differently visible’ world, a world which is suggested between the lines of his poetry and which possesses a paradisiacal quality as it has not yet been subjected to human observation and definition. It is the ‘silence of the world before Bach’ to quote the title of one of his collections of poems, published in 1982. The ‘I’ may be a ruler ‘who joins together a world / of shifting, roofless shadows’, but the poem saying this – Sonnet XIV – closes with the line: ‘The ice on the source is thin’.
Lars Gustafsson’s poetry could be called centrifugal rather than centripetal; it searches for a middle ground, a region between the visible and unvisible, but equally material, world. This world is not the real one, as the Dutch poet Hans Lodeizen once wrote. Lars Gustafsson might have replied: this world is not the only real one. Or: this world may be more real than we are.
© Bernlef (Translated by Susan W. Howard), Poetry International Festival
[Lars Gustafsson took part in the Poetry International Festival Rotterdam in 1970, 1979, 1991, 1993, 1994 and in 2005. This text was written on that occasion.]

THE WIND TURNS THE PAGES