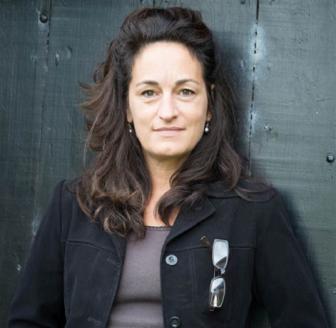 (United Kingdom of Great Britain and Northern Ireland, 1966)
© Julia Mear
Biography
Greta Stoddart is a subtle, surprising poet whose work seems to hinge on those moments when everything might just change. Her first book came out in 2001 and established her reputation, with its beautifully sensual, uncomfortable poems about relationships, sexuality and the interior life. In 2005 she was named in Mslexia magazine’s list of the top ten contemporary women poets. She trained in theatre and toured for years with a physical theatre company, and her poems owe to this background a sense of performance, and a sense of the immediate dramatic moment. She regularly speaks her poems by heart and is an electrifying performer.

Greta Stoddart was born in Oxfordshire in 1966, and grew up in Oxford and in Belgium. She studied drama at Manchester University and at the L'École Internationale de Théâtre Jacques Lecoq in Paris, which specializes in physical theatre, and then co-founded the theatre company Brouhaha. After five years spent touring with it across the UK, Europe and South America, she left to settle in England and write.

Her first poetry collection, At Home in the Dark (Anvil, 2001), won the Geoffrey Faber Memorial Prize and was shortlisted for the Forward Prize (Best First Collection). It opens with a poem called ‘The Convert’, whose title seems to hint at her ‘conversion’ from the theatre, with its direct, gestural immediacy, to the “dark” of poetry.

Where “this one here who can’t sleep (again) / adrift in her room, surrounded by her things” might be the poet, the room itself is carefully lit like a stage, and various characters experience the darkness and the “sleep” that can come with it: “Let’s say it was for that one high-/arch perspective that she made the leap”.

Andrew McCulloch reminds us in an introduction to ‘The Convert’ in the Times Literary Supplement that “Marcel Marceau said that mime can ‘make the invisible, visible and the visible, invisible’.” Poetry itself shares the mime’s need for concentration and balance, and combines introversion and performance, but using words. This book, full of declared and undeclared theatrical moments, uses words as precisely as gesture, so that the reader is drawn into an emotional space almost unawares. Ezra Pound defined the image in poetry as “an intellectual and emotional complex in an instant of time”, and these poems pinpoint with great delicacy the critical moment – through perception (as when two lovers bring a mirror home and suddenly find themselves unfamiliarly reflected in it), or through action, as in ‘Errand’:

Dusk. A thin rain. A child with a letter skips
slowly to the box, reaches up, then hesitates
– so a simple act, freeze-framed, hinges at fate –
( . . . )
The lamps stutter on, the street is lit like a scene.

Stoddart’s second collection (Salvation Jane, published by Anvil in 2008), was shortlisted for the Costa Poetry Prize. The title is also the name of a purple, thistle-like flower which can also be called ‘Paterson's Curse’, and which, as Sarah Crown wrote in her review of the book for the Guardian:

is simultaneously feted for its fine honey and feared for the damage it can do to pastureland and grazing animals (it spreads like wildfire and is fatal if eaten in large enough doses). Stoddart’s plant is a paradox . . .

This paradox is another way of looking at the dramatic moment of choice in the first collection: how we perceive things, how we are able to encompass different modes. It’s also a concept that fits with female experience. The poems of motherhood in this book address the physicality and complicated emotions of raising small children, in rich, packed imagery. A baby is born by Caesarean “into this theatre”:

In 2012, her poem ‘Deep Sea Diver’ was shortlisted for the Forward Prize (Best Single Poem). The poem deals in metaphor and transformation, as the narrator looking at the moon sinks down into the deep ocean – rather in the manner of Maurice Sendak’s mysterious children’s book, In the Night Kitchen, where the hero, Mickey, falls into the darkness and discovers the source of making (and Laurel and Hardy, with their slapstick):

into the sea,
into the realm

to the outer core
of the earth’s interior,
its massive indoors

when I saw hanging there
a sole, or flounder

Greta Stoddart lives in Devon, where she moved in 2007, and works as a poetry tutor. Her third collection, Alive Alive O, is due out from Bloodaxe in 2015.