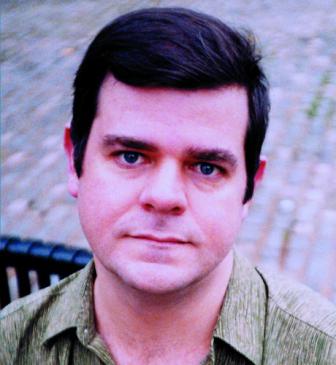 (United Kingdom of Great Britain and Northern Ireland, 1966)
Biography
Roddy Lumsden is a Scottish poet, editor and poetry teacher, based in London, whose championing of several strands in current US poetry has helped to embed its influences in a rapidly broadening contemporary UK scene.

His poetry is marked by a wistful melancholy and self-examination, fractured narratives, and formal inventiveness. His addiction to the minutiae of form is reflected in his not-so-secret second career writing quizzes and crossword puzzles; he has also published a book of trivia.

Roddy Lumsden was born in 1966 in St Andrews, Scotland, the second son of an electrician and a housewife, and started writing poetry seriously in his teens. At university in Edinburgh he started a student poetry magazine with fellow poet AB Jackson, and this served as the vehicle for his first published poems.

He won an Eric Gregory Award (for poets under 30) in 1991, a period when, as he has told The Poetry Kit, Lumsden was “working mainly as a quizmaster and writing two three-hour quizzes each week [which] took up all my creative energy”. His poetry – and especially his early poetry – was heavily influenced by his interest in pop music, and his first collection (which was shortlisted for the Forward Prize for Best First Collection, 1997) was called Yeah Yeah Yeah. The Book of Love followed in 2000 and was shortlisted for the TS Eliot Prize and The John Llewellyn Rhys Prize.

Lumsden has characterised his teenage poems (in The Poetry Kit interview) as “playful, formal, dreamy, sometimes twee, sometimes surreal, with sexual and religious overtones. ‘Private World’ stuff. Betjeman was an influence then. And pop lyrics”. Of the later work in his first three collections, he says:

. . . there is a degree of sophistication and game-playing which has overtaken the sentimentalism. There has always been a great amount of self-reference in my work, though it is seldom ‘confessional’ and this began then. ‘Roddy Lumsden’ as opposed to Roddy Lumsden, if you see what I mean. A certain stepping aside.

This stepping aside is evident in his next collection. Roddy Lumsden Is Dead (from Wrecking Ball Press, 2001) deals with a bout of poor mental health in typically ironic fashion, with a long section in which every title begins with the word ‘My’: ‘My Pain’, ‘My Complex’, ‘My Accent’, ‘My Realm of the Senses’, and so on. ‘My Pain’, the first one, is prefaced by a quote from Neil Powell in the Times Literary Supplement:

. . . one begins, ungratefully, to long for the contrasting tone of some honest, unironic misery, confident that when it arrives Roddy Lumsden will have the technical resources to handle it.

The book is full of pain and doubt and dislocation, but it is also movingly funny. ‘My Prayer’, “for those in peril in the sea of faces”, is also a prayer:

For all those under mental anaesthetic,
for those who’re wrestling with the other self,
for all the dreamers starving in an attic,
and poor souls held at ransom by their health.

I think I know what will happen.
Nature, after abhorring the vacuum,
will turn to me.

There’s an apocryphal story where Toulouse Lautrec says to Mallarmé, in the time-honoured fashion, “Say – that’s a good idea for a poem”, and Mallarmé replies, “Poems aren’t made of ideas. They’re made of words.” Nowhere is this more true than in Lumsden’s more recent poetry, full of wordplay: words as malleable entities, words planted almost like flags in a terrain. In particular, Lumsden has an interest in idiolect – that is, the words that belong specifically to a particular person and may not even be found in a dictionary: local and dialect words, neologisms, portmanteaus, nonsense words, nicknames, slang, private code. This is poetry almost in its magic sense, with words as talismans.

You arrive equal, in the manner of most beasts
and then begins the extrication, a classical
diagnosis; prepare to be sifted for gold-specks.

All the lives lived, all the devilish spurnings,
the haywire of secrets, the kelp of shame and
thoughts no man should have in bible hours . . .

. . . All the palaces of small mercies pillaged;
in the ruins a book of wiving strategies,
the new skin skidding round the old chicanes . . .

Poems are also made of forms. Lumsden untiringly imposes new sets of almost idiolectical (if that’s a word) constraints on himself, like Harry Houdini trying for better knots; some of these he formulates into a new ‘form’. One such, which has made its way into the work of other poets, is the ‘hebdomad’:

The form is 9 tercets, fairly long lines. A somewhat chatty tone. The information used in the poem should come together over about one week – take notes, think of overheard conversations, domestic situations, facts garnered from the media. The poem should work by BOTH juxtaposing the stuff from the week, and drawing strands between two dominant subjects.

‘The Microkite’, a hebdomad in his fifth collection Third Wish Wasted (2009), begins:

The quarter horse still isn’t ready to be backed.
There’s talk of new flooring for the upstairs rooms,
a mention of a sofa-bed for visitors.

The quiz team tell me I’m looking healthy:
half a stone dropped, a shave, a ten-minute haircut.
It’s the first time they’ve seen my ears . . .

. . . and continues to a not-quite resolution, via the detritus of a week. This is not poetry of fresh-faced determinism and neat certainties.

The contemporary American poets whom Lumsden particularly admires – Chelsea Minnis, DA Powell, Brenda Shaughnessy, and others – write with emotional and sexual directness, but with fractured syntax, or narrative that follows an internal (idiolectical?) logic, and various formal devices that might appear comparatively impenetrable to some readers. This sort of approach has long been a feature of US poetry much more than in the UK. As Lumsden said, once again in the Poetry Kit interview:

It’s odd that mid-century Americans like Berryman, Plath, Lowell, Bishop, Schwartz, O’Hara, Stevens, Kees and so on are among the great influences on my generation of British poets, yet they all seem so scared of the rawness, risks and flaws which made their poems so great.

A new generation of 20- and 30-something poets has recently come up in the UK – including people like Jon Stone, Luke Kennard, Heather Phillipson – writing from a formal and experimental vantage point that owes something to this American (and millennial) influence. Many of these are among Lumsden’s students, and his teaching work has been very influential in opening up a culture of what one might call extreme poetic technique. Lumsden edited the 2010 anthology Identity Parade (Bloodaxe), a generational anthology modelled somewhat on the influential American Legitimate Dangers; it presents many of the younger poets working in the UK and demonstrates the extent to which British-based poetry is accommodating these wider influences. He is overall editor of Salt’s annual anthology The Best British Poetry; he teaches for the Poetry School and independently, and runs occasional readings and events in London, including the annual reading of the new crop of Eric Gregory Award winners. He also continues to work as a puzzle and quiz writer, and recently represented Scotland on the popular BBC radio quiz programme, Round Britain.

Towns You Only Pass Through

Miss Martindale in the Outback