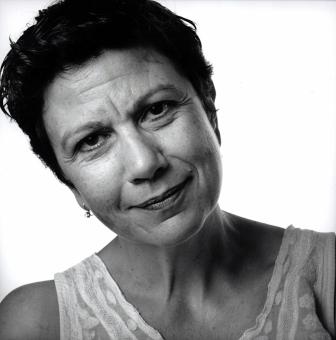 (Greece, 1945)
© Tineke de Lange
Biography
The private, restricted world indoors versus the great outdoors, is a recurring theme in Papadaki’s early poetry. ‘Between door and horizon God occurs’. She even wrote an ode to the pressure cooker, entitled ‘Escape from the Kitchen Sink’.
She ‘switches off the extractor fan’ and tries to escape from the temporary, the senseless, into that which transcends it; at the same time she tries to build her own myth and vision from this very ‘anti-poetic’ material, a process which often involves irony.

From a woman in league with all women of her time she has gradually become conscious of being a link in a chain of women leading back to the beginning of time and forward into the future. From the personal experiences in her early poetry she has moved to more archetypal images of woman and the female body: cosmic concepts, yet derived from the material, physical world, with women at the centre. Her poetry is physical, paganistic, often obscure, focussed on forces and situations of passion, pain, pleasure and distress.

Athiná Papadaki has studied political science and works as a journalist. Since her début in 1974 she has published seven collections of poems and six children’s books. Her poetry has been translated into English, French, Spanish, Polish and Romanian. She is a member of the Greek Writers’ Association. Apart from her native Greek she speaks French and English.
© Hero Hokwerda (Translated by Ko Kooman)
Athiná Papadaki took part in the Poetry International Festival Rotterdam 2000. This text was written on that occasion.