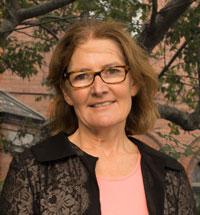 (Ireland, 1954)
Biography
Catherine Phil MacCarthy was born in County Limerick in 1954 and educated at University College Cork, Trinity College Dublin, and Central School of Speech and Drama, London. She has taught at Waterford Institute of Technology and at The Drama Centre, University College Dublin.  Indeed, the influence of drama is evident in her ability to sketch character and build poems to a climactic, dramatic resolution.  MacCarthy began writing full time in 1999, and has since received the Fish International Poetry Prize , the Dromineer Poetry Prize and the Lawrence O'Shaughnessy Award.  Her most recent collection The Invisible Threshold (2012) was shortlisted for the Irish Times Poetry Now Award.

On presenting Catherine Phil MacCarthy with the prestigious 2014 Lawrence O'Shaughnessy Award for poetry, James S. Rogers and Thomas Redshaw of the University of St Thomas asserted, ‘For three decades Catherine Phil MacCarthy has given her readers in Ireland and abroad fresh reasons to stay awake, and helped us to look into the unexamined spaces of Irish life’.

Indeed, the spaces in private life which we tend to shy away from, or speak of in polite euphemism, are the very ones MacCarthy magnifies and studies, as the young girl in 'Suntrap' does when she is shown ‘for the first time how to burn’. She asks her readers not to look away from bullying, the exquisitely painful labour of childbirth, from miscarriage, dementia, gossip and violence.  And although her work traverses through emotional terrain, she never resorts to the vehicle of sentiment.  As Eavan Boland states in her comment on This Hour of the Tide, ‘this lyric mixture of real feeling and craftsman-like grace makes the edges of these poems sharp and dangerous’.

There is an arc among the collections. This Hour of the Tide, for instance, centres  (largely)on  concerns of childhood and sexual awakening.  Motherhood, artistic development, and loss of innocence are tackled in the blue globe and Suntrap. The Invisible Threshold  leads us to a deeply philosophical and mindful space, to a focus on  loss, death and the liminal.  Simultaneously, her work within each collection brings readers deeply into the 'present' moment of the poem, insisting on focus, witness and engagement.

Nature, animals and landscape feature throughout her oeuvre, often acting as catalysts for powerful meditations  on what it means to be human.  'Terriers', for instance, deals with a vicious assault by dogs upon a Persian cat: ‘fierce as lovers, teeth sunk / so deep he moaned’, a violation that leads the speaker to wonder ‘about/ their eagerness to / tear him open’. It’s unsurprising, then, that Sharon Barnes of In Dublin magazine described MacCarthy as a poet who ‘uses precise imagery to suggest that there is a barely controlled violence within the landscape itself’. But such nature-focused pieces explore not only darkness and violence, but also joy and consolation. As Nessa O'Mahony asserts, ‘it strikes me that MacCarthy is a Romantic poet in the original sense; for her, landscape and nature provide a nurse to the imagination and the soul’.

Few reviewers fail to mention the lyric precision with which she operates.  For David Wheatley, it is her ‘sureness of touch’, for Thomas McCarthy she is ‘a chthonic observer’, for Caitríona O'Reilly her work is ‘executed with skilful economy and a painterly deftness’.  ‘Painterly’ – or maybe even filmic – seems especially astute, suggesting the way movement manifests itself in her work:

Our breaths plumed in the air
as the blade rang solid as rock
against each chip
that flew like smashed flint,
and tiny capillaries in Mother's face
grew livid with effort.
– 'The Big Freeze'

Described in the Irish Times as a poet ‘of love in all its forms’, in her work  MacCarthy  celebrates human connection in both its classic and unexpected aspects. Taking inspiration from myth, 'Gráinne's Bed' is bold and unblushing in its eroticism: ‘taking you inside, time and again, / the deep lair of my being where / your seed sprouts from my blood’.  'Maternity' witnesses a different and even more intensely intimate human connection; the rarely written about dual effort of childbirth:

MacCarthy’s poetry maps the boundaries of the interior and exterior, the intersections of humanity and the natural world, the Boolean overlap of mother and child, and the comingling of lovers. Her work gestures towards the larger psychic and emotional space in which all our relationships exist. In both her darker work, and in her poems of celebration, she foregrounds the virtues of witness, acceptance, endurance, and persistence – available to all of us in even the bleakest of times.

MacCarthy’s Website
Review of The Invisible Threshold
Video of MacCarthy reading at Poetry Ireland
The Center for Irish Studies at the University of St. Thomas on MacCarthy’s reception of the eighteenth annual Lawrence O'Shaughnessy Award
MacCarthy’s author page on Dedalus Press