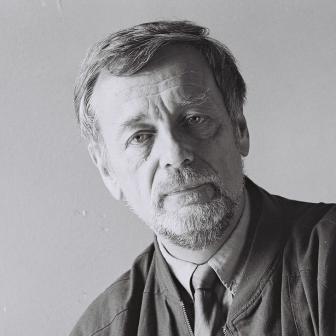 (The Netherlands, 1936 - 2003)
© Pieter van der Meer
Biography
Poetry International has an extensive online collection of poetry and poets, but our offline archive is even bigger. As part of the run-up to our 2014 festival, we asked each of the festival poets to choose a former festival guest from our archives – someone who made an impact on their poetry or the poetry of their home country.

C.O. Jellema was born Cornellius Onno Jellema in Groningen, and went on to study theology and German before publishing his first poems in 1961. He started his career as a German teacher, wrote an abundance of literary criticism for various newspapers and eventually turned to poetry. As a commemoration of his passing in 2013 two museums held exhibitions, his former home was opened to the public and a book honouring his life and work was published by a close friend.

Although his first poem was published in De Gids  in 1961, Jellema’s breakthrough only came in 1981 with the collection De Schaar van het Vergeten. The poet went on publish thirteen collections, including De toren van Snelson (1983), which won the Herman Gorter Prize. He also won the Hendrik de Vries Prize for poems, odes, and sonnets (1992). Jellema was known for his fondness for sonnet form, and wrote many sonnets during his writing career. More general themes in his writing were reflections on the ‘narrator’, as well as (later) ‘time’ and the contrast between emotion and rationality. He found it hard to describe his poetry himself, saying: “You’ve always got the idea: it’s all in the poem just that bit different to what I’m saying now. It’s in there, and very meticulously. Very exact. Why should I say something else about it then?”

There was something deeply poetic even to Jellema’s lifestyle. From 1989 onwards the poet and his partner resided in a large, isolated, house called ‘Oosterhouw’ up in the province Groningen. From this residence he wrote most of his oeuvre, for which he was awarded the A. Roland Host-Penning in 1997. On his death in 2003, Volkskrant writer Michaël Zeeman described him as “one of the most exceptional poets in the Dutch language”.
© Sanna McGregor
Bibliography