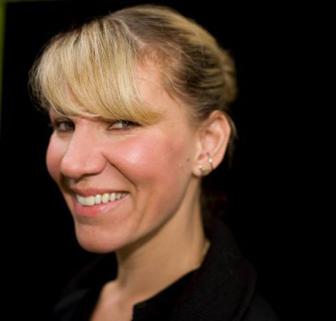 (United Kingdom of Great Britain and Northern Ireland, 1976)
© Martin Figura
Biography
Hannah Lowe is one of a generation of younger poets whose work celebrates the multicultural life of London and its environs in the eighties and nineties. She writes with a strong sense of place, voice, and emotional subtlety.

Hannah Lowe was born in Ilford, Essex, in 1976, to an English mother and a Chinese/Jamaican father. She got her BA in American Literature at the University of Sussex, has a Masters degree in Refugee Studies, and is currently working towards a PhD in creative writing.

Her pamphlet The Hitcher was published by The Rialto in 2011 and was highly praised. Chick, her first full collection, came out from Bloodaxe in 2013, and was shortlisted for the Forward Prize for Best First Collection, and the Aldeburgh First Collection Prize.

The book tells stories about her childhood and adolescence, much of it revolving around her father, a Chinese/Jamaican card shark with a past (including another family), whose gambling pals called him Chick. There are flashbacks to his father, marking cards in Shanghai. We’re shown a London enlivened with reggae and body popping, Lowe’s embarrassment at having a dad who was so different (“Mum called you a croupier. / At school I said you drove a cab”, she writes of him in the title poem) and her fascinating extended family (including her Chinese grandmother, who from the end of her bed demands: “‘Lord girl . . . / How come you white? / How come so tall?’” (‘Grandmother’)).

Through poem after poem, in glimpses of the little-known dad, the poet depicts a complex relationship with him, which culminates in almost overwhelming feelings of love and grief at the end of his life. We see Chick loading the dice, marking the cards, asleep in the daytime, making paper butterflies. In a prose poem, someone called ‘Manchester George’ reminisces:

We walked into rooms and people knew him. One night at The Victoria the boss came down and said, Not tonight Chick, please, the three of us at the door – because the game was rigged – they didn’t want him in because he’d win and they knew it . . .

Interspersed are poems about cousins, siblings, and forays in the city which give a picture of a coming of age, which feels like a microcosm of our age.

An evocative poem called ‘New Flour, With Old’ tells us, “Lorna writes from Canada: The year was 1970./ Your daddy drove me down to Brixton and we parked up . . .” and the years melt away as the poet sits at home in Brixton. “I lie in my room on the hill watching Babylon again . . .”

This is highly specific poetry, full of objects and images and places: it feels almost tangible, and is written in a colloquial style as if one were in a conversation.  One of the best-known poems from the book, which originally appeared in the pamphlet, tells the story of an accident – a narrowly averted tragedy – at a New Year’s Eve party full of young people:

My brother held his arm out to us, palm
upturned, a foot high spray of blood.
This was Ilford, Essex, 1993, nearly midnight,
us all smashed on booze and Ecstasy and Danny,
6 foot 5, folding at the knee, a shiny fin of glass
wedged in his wrist.
(‘Fist’)

Chick was followed in October 2013 by a short pamphlet of love poems called Rx, published by sine wave peak in an edition of 250 hand-bound copies, all composed over one summer in which we see Lowe’s life story continuing:

R and me take up for “time being”.  We’re
a strange pair, him gawky and bright
as a dewed hedgehog, I arrive everywhere
in clinging primaries and haze of Amarige.

Hannah Lowe has lived in Brighton, California, teaches English in a secondary school, and now lives in North London with her partner and baby. Her prose memoir, Long Time, No See, is due out in July 2014 from Telegram Books. She is working on her second full collection, which will be titled Chan.