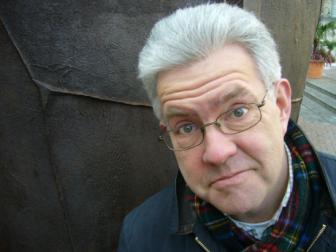 (United Kingdom of Great Britain and Northern Ireland, 1956)
© Adrian Mealing
Biography
Ian McMillan is a poet and performer from Yorkshire, as well as a playwright, journalist, and all-round poetry whirlwind. As well as writing and performing his own work, for both adults and children, he is a tireless champion of poetry and the spoken arts, and a campaigner for the arts to be for everybody. He has been described by Poet Laureate Carol Ann Duffy as “world-class – one of today’s greatest poetry performers”, and is one of Britain’s best-known broadcasters.

Ian McMillan was born in Darfield, South Yorkshire, in 1956.  On his website he describes his childhood:


I wanted to be a writer all the way through my schooldays, but I wasn’t sure how to go about it. All the books I got out of the library were written by people who lived in Surrey, not the Yorkshire Coalfield.

Undeterred, he got a degree in Modern Studies at North Staffordshire Polytechnic in 1978, and then set about becoming a full-time freelance poet (as well as playing drums with “Barnsley’s first folk-rock band”, Oscar the Frog). Since then, he has never stopped. His first collection, The Changing Problem, was published by Carcanet in 1980, and since then nearly thirty books have followed – poetry, prose, plays, and even a verse autobiography called Talking My Way Home.

His poem ‘The Bard of the Button Tin’, which appears on the homepage of his website, was written for Burns’ 250th birthday; it captures, in one small anecdote, McMillan’s whole life-work of bringing poetry down from its ivory tower and reclaiming it for all people. In this poem, the poet remembers his mother’s button tin, an old biscuit tin with a picture of Robert Burns on the lid:

I asked my dad about the solemn bloke
On the button tin; my dad explained
About the bard, and he explained
How the poet’s words came from the folk

He listened to, their songs, their rhymes,
Their stories in the Ayrshire air;
Dad’s story hung in Yorkshire air
And then, as he did many times

My Dad recited ‘To a mouse . . .’
In his dancing Scottish voice
And a poet’s long-dead voice
Reverberated round our house . . .

As one might guess from this, McMillan has a strong sense of heritage and place, and Northernness, but he is far more than just a local poet. The Chinese dissident poet Yang Lian once said, “There is no international; there are only many locals” – and this is the kind of local identity that Ian McMillan brings to his work all over the country. Literature itself is a kind of local, and in that place, Ian McMillan is all about the people.

He works with young people in schools, he reads in prisons, and performs at festivals; and for the past several years has been compère for the annual ten-poet event for the TS Eliot Prize, Britain’s most prestigious poetry award. (In characteristic fashion, he once joked on stage that he was wearing the same shirt he had worn to present the same event the year before.)

With his distinctive Barnsley accent, he is a familiar face on television, and has appeared on all the BBC’s national radio channels. In 2005, the Radio Times listed him 22nd on a list of the forty most powerful people in radio. He currently presents ‘The Verb’ – “Radio 3’s cabaret of the word” – featuring an eclectic spectrum of poetry, including experimental and surrealist poetry, which he has cited as a major love and influence on his own work. This ability to present the kind of art most people consider highbrow or difficult in a completely accessible way – for the sheer pleasure of it – is what marks him out among both poets and cultural commentators.

The mashing-up of high culture and Yorkshire is the postmodern trademark of his own poems, and he uses it to both comic and serious effect. Comedy, making people laugh, is a large part of what McMillan does – but, in the great British tradition of comedy, it can be a dark laughter.

Dialect, social and political concerns, and a dazzling play of words and ideas, inform poems with titles like ‘The Texas Swing Boys’ Dadaist Manifesto’, ‘The Meaning of Life (A Yorkshire Dialect Rhapsody)’, and the strangely chilling ‘Branwell Brontë is Reincarnated as a Vest’:

I hang here like a ghost
on the midnight line

frost hardens me, hardens the frocks
I hang with.

Irony to hang here on
a night crashing with the loud moon,

‘The Meaning of Life (A Yorkshire Dialect Rhapsody)’ combines the local speech (which he has called his “tuning fork”) and the surrealist imagery that is a form of dialect from his other country, literature:

Over t’top in’t double-decker groaning like a whippet
like a lamplighter’s daughter in a barrel full of milk,
I said, ‘Hey, you’re looking poorly’
He said, ‘Night’s a dozen eggs’

McMillan has written articles in numerous magazines, and writes a weekly column in his hometown’s local newspaper, The Barnsley Chronicle. In 2010 he was appointed poet-in-residence to the English National Opera, and he is also poet-in-residence to his hometown football club, Barnsley FC. His play Sister Josephine Kicks the Habit, based on the work of the Yorkshire singer-songwriter Jake Thakray, appeared in 2005.

Ian McMillan gets up very early in the morning and is a prolific and dedicated tweeter. You can follow him on @IMcMillan. Even before his breakfast, he lives, as he himself says, “a life lived with words at its core”.

MY KIDNAPPING APPROACHING THOSE ‘RUDDY’ BELISHA BEACONS NEAR THE POST OFFICE AGAIN THE INDOOR GLIDER: A MINIATURE
Poems
Poems of Ian McMillan

Approaching those ‘ruddy’ Belisha beacons near the Post Office again