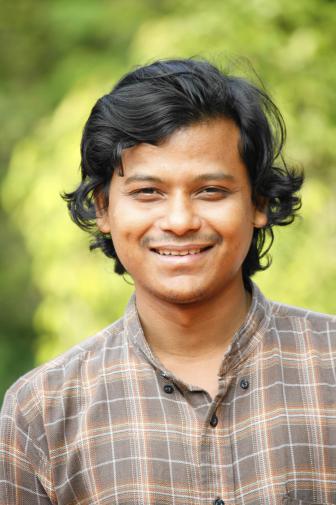 (Burma, 1979)
© Maung Day
Biography
Maung Day is a Myanmar-born poet, editor, and visual and performing artist based in Bangkok, where he works for Eco-village Transition Asia, a Thai NGO which focuses on Eco-village Design Education and the empowerment of civil society.
Maung graduated from the Institute of Technology in Thanlyin and Dagon University in Yangon, was chief editor of Alinka Wutyi music journal and edited Han Thit literary magazine and the art magazine Pan, amongst others. He has published three books of poetry, Pleasure Sea (Kyaw Mhway, 2006), Surplus Biology (The Eras, 2011) and Alluvial Plain of Ogres (The Eras, 2012). His poems have appeared in international magazines such as The Wolf, Guernica and The Awl. Maung’s translations of children’s books include The Wonderful Wizard of Oz, Charlie and the Chocolate Factory, Charlotte’s Web, and several others. He co-founded the celebrated Beyond Pressure International Performance Art Festival in Myanmar in 2008, and his artworks have been showcased at home and abroad and on his blog.

A Submission to the National Day Special Edition