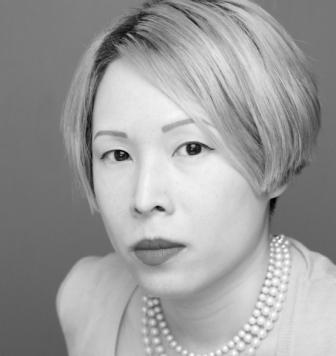 (United States of America, 1971)
© StageShots London
Biography
With just two collections, Jane Yeh has established herself in the UK poetry world as an assured, witty, linguistically adept magpie. Taking her subjects from almost anywhere, her poems explore what identity means in a world of appearances. Paintings, robots, animals – even the owl who was chosen to play the owl in the Harry Potter movie – show us facets of ourselves.
Yeh’s first book, Marabou, was published by Carcanet in 2005 and shortlisted for the Whitbread, Forward, and Aldeburgh Festival poetry prizes. Drawing on Yeh’s university experience studying social, cultural and art history, the poems use anachronism, unexpected juxtaposition, and witty observation to bring diverse personae to life. Her second book, The Ninjas, was also published by Carcanet in 2012.

Yeh’s poems often employ a matter-of-fact tone of reportage, avoiding subjective fiction-style characterisation, but rather allowing voices to filter through from beyond – beyond time, beyond the literal.

Anne of Austria and Isabella of Bourbon speak in unison, in ‘Double Wedding, 1615’ (from Marabou):

Afterwards we will bear the strange marks
Of another house, gold arms on a gold collar,
But for now no other jewels hang about our necks
Than these:  pearls knotted with string, clasped
With velvet, and fitted just the length
To choke us.  This day will slip from us
Shedding marquisette, point d’esprit, zibelline, trailing
Taffeta and broché behind it;  it will leave us bare-
Handed and desperate to remember what we were
Before it . . .

This exercise in voice-building appears at the centre of what Yeh does, as an interrogation of what it is to be an authentic person – or, rather, being. The difficulty of creating an ‘authentic’ voice for a historical character is not much different, in one sense, from creating one for an animal (or for the person sitting next to you on the bus, for that matter). As the poet told the New Welsh Review in interview:

. . . these characters were (rather inevitably) anachronistic, i.e. the product of me, a twentieth-century American woman, trying to imagine the voice and thoughts of someone in very different circumstances in the past. The same could be said of writing in the voices of animals, which I also tend to do – that they’re overly anthropomorphised, hence inauthentic. But what’s important to me is trying to access the language of these characters, rather than trying to create ‘realistic’ simulacra. Their language, and their situations, are much more interesting than my own.

Discussing Yeh’s poem ‘Musk-Ox’ (from The Ninjas) in the Guardian, Carol Rumens describes the “guiltless, almost jubilant acceptance of its own anthropomorphism”, adding: “That stance is also an honest one . . . No achieved poetic creature . . . is un-coloured by its human imaginer.”

In Yeh’s case (as with, say, Bishop or Moore), this involves a minute, almost forensic precision of description, undisturbed by any random movement or gratuitous phrase:

. . . His tiny eyes rove over
The rich summer landscape. He lumbers

Up a crest like a minibus
Made of hair, patiently looking for
The next buffet
Of grasses. If he could choose, he'd

Many of Yeh’s poems deal with the subjects of paintings: by Vermeer, John Singer Sargent, a follower of Van Dyck, Manet. One poem, ‘Portrait at Windsor’, is narrated by a painting itself, damaged in the fire at Windsor Castle.  These seem in Yeh’s hands more like a way of exploring links, or fractures, between the image and the experience, the person and the icon. The human and not-human aspects of one creature. In this way, these poems seem to be less that workshop staple, the ‘ekphrastic poem’, and more “21st century postmodernist”, as Carol Rumens says (in the Guardian, as above). The tension is between the appearance and the existence, the external (mediated) identity and the voice itself (which cannot, as above, be unmediated).

Poems in these books come in sets, numbered but not necessarily together, answering each other. List poems in The Ninjas play a game: ‘Scenes From My Life as Sherlock Holmes’ is answered by ‘Sherlock Holmes on the Trail of the Abominable Snowman’ (“1. A wrong turnip (taken for a coloured swede)”), which is then answered by ‘Scenes from My Life as the Abominable Snowman’.

A poem about kittens – called ‘Kittens’ – embodies this principle, from its first line: “They roll around on the floor like demented marshmallows”. Its end-stopped lines list the characteristic of kittens in a way that recalls Christopher Smart’s famous cat, Jeoffrey – but defamiliarises at the same time as it engenders recognition.

They make pathetic mewls when you put them on the floor.
Sometimes their eyes point in different directions.
Their feeble powers of cognition make them think chair legs are tree
trunks.
They also think giants have abducted them for uncontrolled experiments.

Overall, this is poetry of observation, which means that it is about asking questions. It’s poetry about looking at the world, like a defective-eyeballed kitten, and asking what we are.

Jane Yeh was born in America, and studied at Harvard University.  She holds master’s degrees from the Iowa Writers’ Workshop and Manchester Metropolitan University, and now lives in London, where she is Senior Lecturer in Creative Writing at Kingston University.

Her poems have appeared in the Guardian, the Independent on Sunday, The Nation, Poetry Review, and other journals, as well as in anthologies including The Best British Poetry 2012 and The Forward Book of Poetry 2006 and 2013.  She also teaches Arvon writing courses and writes on books, theatre, fashion, and sport for publications such as the Times Literary Supplement, Time Out, and the Village Voice.  She has been the recipient of an Academy of American Poets Prize, a New York Foundation for the Arts Fellowship, and a residency at Yaddo.