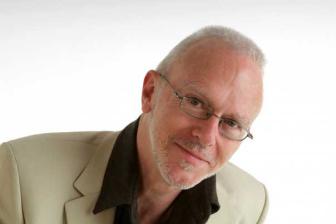 (Ireland, 1947)
Biography
Trevor Joyce was born in Dublin in 1947 and raised between Mary Street in the city centre and the Galway Gaeltacht. He began writing poetry in his teens and in 1967 he and Michael Smith co-founded New Writers’ Press [NWP] with the intention of publishing the young poets revitalizing Irish poetry against the “antiquarians” that Beckett said were unaware of “the old thing that has happened again, the breakdown of the object . . . [and the] rupture in the lines of communication” (1934). Joyce’s first collection, Sole Glum Trek (1967), attends to the body and breath of inner city Dublin. Joyce writes of streets and canals, of stark life and sudden death, and the power of perception to shape the lived environment.
Sole Glum Trek met with high praise for its ability to cultivate a world through words while retaining the physicality and force of the words themselves. Eavan Boland’s Irish Times review lauds a reading by the poet as “outstanding . . . for the power and beauty of his work”. Watches followed in 1969, and Pentahedron in 1972, revealing a poet of close eye, steady hand and a keen sense of poetry as a “profoundly central activity” capable of challenging the processes of perception mediating one’s experience of the world. NWP published first collections by Joyce and Smith as well as Paul Durcan, Leland Bardwell, and Gerard Smyth. By ’69 they had amassed 18 publications including translations of Vallejo, Borges and Trotsky and the inaugural issue of The Lace Curtain.

In 1976, Joyce published The Poems of Sweeny, Peregrine, thus concluding this first phase of his writing and publishing career. Joyce’s appropriation of the ancient Irish tale of Buile Suibhne follows the distinctly modernist trajectory of James Clarence Mangan and Ezra Pound in re-working rather than translating the earlier text. The dense, visceral verses of Sweeny’s pained peregrinations drive the reader onwards in confrontation with language so that even the pieties of the final poem cannot discharge this acutely physical piece. In Sweeny, Joyce begins to reorient his use of language, interrogating the referential character of the word and thus the possibility of the lyric voice.

After Sweeny, Joyce undertook a critical reappraisal of the language and lyricism of Irish poetry that so challenged his own formal and stylistic innovations as to render him silent for the following twenty years. The collection stone floods (1995) is the poet’s response to this period, drawing together a vast diversity of sources, influences, registers and forms to produce a poetry adequate to the contingency and complexity of contemporary life, all centered around the thematics of causality, contrast and process. This began a period of extraordinary productivity for the poet, with Syzygy appearing in 1996 and Hellbox, Hopeful Monsters and Without Asylum in 1998, with Joyce also establishing the Cork SoundEye Poetry Festival which is now in its sixteenth year. In 2001, Joyce’s published the retrospective, with the first dream of fire they hunt the cold, bringing together a selection of earlier texts with these most recent and provocative collections, a series of new, rigorously formal poems and ‘Trem Neul,’ a forty-five page poem engaging personal, national and literary histories and defying the prescriptions of genre and formal tradition.

Joyce won a Fulbright Award in 2002, and in 2004 he was elected to Aosdána. 2007 saw the publication of What’s In Store. Here, Joyce demonstrates what’s possible when language is worked at full intensity in a stunning array of voices, texts and literary heritages, each transfigured towards a new and radical potential for Irish poetry. In 2009, Joyce’s collection Courts of Air and Earth was shortlisted for the Corneliu M. Popescu Award for European Poetry in Translation. He has also enjoyed residencies at the University of Cambridge, the University of Galway and the Cill Rialaig Project, Co. Kerry.

VERSES WITH A REFRAIN FROM A SOLICITOR’S LETTER

ELEGY OF THE SHUT MIRROR