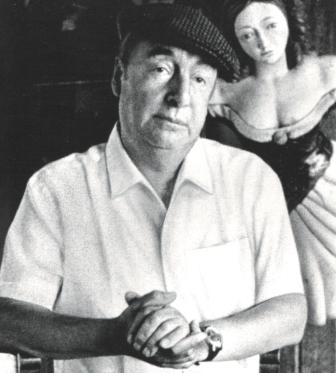 (Chile, 1904 - 1973)
Biography
Not many poets are able to garner so much fame that they are remembered worldwide long after their death, but Pablo Neruda (born 12 July 1904 as Ricardo Neftali Reyes y Basoalto) is numbered among them. As a side effect such celebrity, however, we often see that the focus shifts from the actual poetry to the poet's private and public life. In Neruda's case, that public life was very much present, and had a strong political dimension.

This prominent political presence began when Neruda was a stationed in Spain as a diplomat just before and during the civil war, though politics remained characteristic of his public appearances (and for much of his poetry) until his death. But as his commitment testified, and as his dedication to building on the bold, complex and sensual poetry which his collection Residencia en la tierra (1931) exemplifies, Neruda was also a poet who regularly brought forth truly special poems and collections.
Residencia en la tierra was the second milestone in Neruda's oeuvre. The first was the collection Vente de amor y una canción pumas desesperada, published in 1924. This collection was immediately a great success, and has remained so to this day – the Spanish-language edition has sold over a million copies. It is from this collection that the poetry in the film Il Postino is drawn.

The third milestone in Neruda's oeuvre is the massive epic-lyrical Canto General. Neruda started work on this in the years 1939-1940, while he was a key figure within the Latin American branch of an international aid project, helping over two thousand Spaniards to escape the Spanish Civil War. After a visit to Macchu Picchu in 1943, he decided that the Canto General de Chile needed to be extended into an epic that would attempt to span the history and nature of Latin America. Macchu Picchu was sung in Canto II, perhaps Canto General's most beautiful (and certainly its most complex and lyrical) canto.
After Canto General, Neruda searched for a more sober form, which is often even more difficult to achieve than ingeneous linguistic complexity. In a series of directly and openly committed collections summarised in a simple language, many of which are more pamphlet than poetry, we also find also several special collections. Memorial de Isla Negra (1964) is one of these, containing one hundred autobiographical poems all written in Isla Negra, the coastal area that Neruda called home. The posthumous Libro de las preguntas also falls into this category. Neruda worked on this last collection from 1971 onward, and in that same year he was awarded the Nobel Prize for Literature.

Shortly before receiving the Nobel Prize, the symptoms of the disease from which he had long been suffering worsened. Back in Chile, Neruda retreated to Isla Negra, where he passed away on 23 September 1973. This came only twelve days after the violent death of his friend Salvador Allende, the elected democratic president of Chile, who has killed in a bloody anti-communist military coup on 11 September 1973. The state funeral of the poet, a public event that was forbidden by the new military dictator General Pinochet, was marked by the appearance of thousands of people in the Chilean streets, where they came together to form the first public demonstration against the new military dictatorship.
© Jan Baeke (Translated by Megen Molé)
Selected Bibliography

FROM: THE HEIGHTS OF MACHU PICCHU