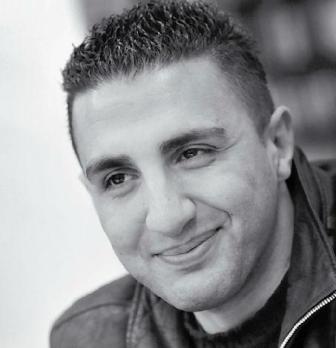 (Palestine, 1978)
© Veronique Vercheval
Biography
Najwan Darwish (1978) is one of the foremost Arabic-language poets of his generation.  Since publishing his first collection in 2000, Darwish’s poetry has been translated into ten languages, including a recent French translation by Antoine Jockey, Je me lèverai un jour (2012). In 2009, Hay Festival Beirut39 pronounced him one of the 39 best Arab writers under the age of 40. He is also the literary advisor to the Palestine Festival for Literature (Palfest), and has co-founded, directed and advised on several key projects in the fields of literature, visual arts, theater, creative writing education, cultural journalism and publishing in the Arab World and Europe.
Readers may presume that writers faced with the immediate realities of life under occupation are limited by the attendant tropes of rage and despair, or else flee into sentimentality or aesthetics. Darwish’s poetry is different. As critic Bashir Abu Manneh, professor of literature at Barnard College (Columbia University), notes, Darwish manages to “overcome the false dichotomy between poetry and social and political reality”. Constrained by neither temporality nor place, his poetry is a medium of defiance, employing a sharp wit to illuminate absurdities and injustices: “But who today will lift a cross from an exhausted back in Jerusalem?/ The earth is three nails/ And mercy is a hammer/ Strike, Lord/ Strike with the aeroplanes/ Oh give me more!”

While his poetry is at times political, it embodies a universal message, reminiscent of the great mystical poets like Rumi. From Jerusalem (Palestine) where he works and lives, Darwish has become a distinguished voice for his nation’s struggle. His poetry renders the particularity of the Palestinian experience in luminous imagery and piercing observations, but his imagination and interests are not limited by borders.
© Emily Dische-Becker
Bibliography of work in translation

A SMALL DAWN JERUSALEM IT’S NO USE AWAKE BELATED RECOGNITION