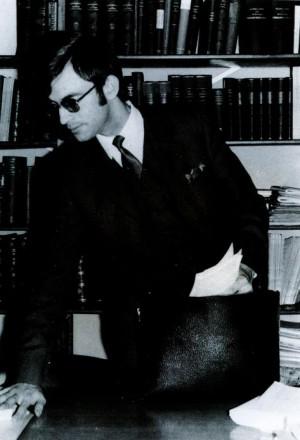 (Belgium, 1941 - 1971)
© Annie Debie
Biography
In 1971, at the age of thirty, Jan de Roek died in a road accident. De Roek was a marked presence in the legendary Antwerp private club VECU; a year after his death a group of artists who frequented the club would form the Pink Poets society. De Roek was highly involved in magazines, as well as poetry events and soirées. He was planning to set up an English-language anarchistic magazine, and one of his last poems, ‘In hoc signo’, was an occasional poem, which he read out to miners on strike. The fact that not a single compilation of his poetry was ever published in his lifetime did not prevent his many friends and acquaintances from recognising the quality of his work.
In 1980, nearly a decade after his death, De Roek’s work was finally made accessible with the publication of a collection of his poems and essays. Thereafter, silence descended around De Roek for a long time, but 2008 saw the publication of Hotel New Flandres, a highly acclaimed anthology of Flemish post-war poetry. The compilers, Dirk van Bastelaere, Erwin Jans and Patrick Peeters, wanted to set the record straight by focusing on the quality of De Roek’s work and its influence on promoting experimental poetry.

The editors of De Roek’s collected works found three unpublished collections of poems in his estate. After comparative study, that poetry proved to have been condensed and brought together in Jeunesse dorée (Gilded Youth), a collection that is like one long poem. Jeunesse dorée is, amongst other things, a museum of carefully considered images and beautiful words, often drawn from nature. This collection is relieved by more accessible passages, such as a “simple homage” to the mother. It might be labelled confessional lyricism, and the word “anecdotes” does appear in Jeunesse dorée, but in fact the whole work is shadow theatre, transcending the purely personal.

Throughout the nearly one hundred pages of the work, an ‘I’ as strongly outspoken as it is vulnerable speaks. He seems broken after a war of youth, in which he, himself, was one of the assailants. Time, the “raging swarm of hours”, is his enemy. To grow up is to become disillusioned. Not only do the loss of youth and ideals torment the main character, but also the loss of a friend. The ‘I’ figure often addresses a ‘you’, a ‘beloved’. This produces intense, heart-rending (love) poetry.

In De kleren van de keizer (The Emperor’s New Clothes) – De Roek’s magnum opus of essays – the author talks about modern poetry or hermetism, which for him had nothing to do with elitist pretension. The essay expresses a self-belief in the I, in the individuality of the poet and in the poet’s commitment: “Real commitment is an uncommitment and is expressed in the distance, the concealed position, the nameless presence. It is a continual adherence to a limit.” The committed is a rebel, the poem only successful when aggressive and sung out of tune amongst the choirboys. Modern poetry “has strangled the nightingales and no longer strums a harp or lute. It is mistrustful of the treacherous warbling of the minstrels, the sweet song of the sirens, the delightful magic carpet of music and its exotic travels. It is aware of the decay beneath the grass and the hypocritical marble and understands what make-up and the emperor’s beautiful clothes are designed to hide.” The resemblance between De Roek’s poetry and his essays is striking. Both demonstrate an immense wealth of imagery, much listing, repetition with variations and, above all, the beseeching tone that perhaps characterises this writer most completely.
© Anneleen De Coux (Translated by Rosalind Buck)
Bibliography