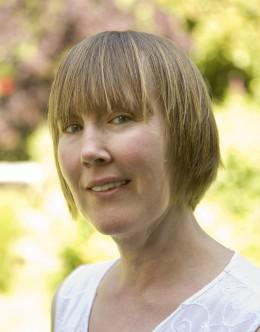 (Ireland, 1962)
Biography
Katie Donovan, born 1962, grew up on a farm in County Wexford and is now based in a suburb of Dublin. She was educated at Trinity College Dublin and at UC Berkeley, and spent a year in Hungary teaching English before returning to Ireland to work as a journalist with The Irish Times. She has published four poetry collections, all with the British publisher Bloodaxe, most recently Rootling: New & Selected Poems (2010). Currently she works as an Amatsu practitioner and as a creative writing teacher at the Institute of Art, Design and Technology in Dun Laoghaire. She has two children.
In an Irish Times review, the respected arts critic Eileen Battersby declared, “Thoughtful and precise, Donovan’s tough, compassionate, practical intelligence is tempered by humour, grace and pleasure in playfulness.” Compassion is key in Donovan’s work –readers witness extraordinarily vulnerable moments, being invited by the author to examine the forces that draw us together and push us apart. The darkness of grief and loss is skilfully balanced with moments of humour or sensuality. Take ‘Yearn On’ for example:

I want you to feel
the unbearable lack of me.
I want your skin
to yearn for the soft lure of mine;
I want those hints of red
on your canvas
to deepen in passion for me:
carmine, burgundy.

The mouth feel of the words alone convey this: the ache of “yearn” and “lure” leading to the luscious “canvas”, “deepen” and “passion”. Battersby’s choice of “tough” as a description of the poet’s work is also apt. Donovan lets no one off the hook, including herself.

She deals with the conflicting desires for independence and togetherness through the exploration of romantic love, motherhood and the grief of loss. Katie Donovan romanticises nothing. The breast-feeding mother is “a loose sack,/ liquid with the loss/ of your form”. Friends bristle through “barbed sisterhood, territorially alert”. A lover’s heart “fed me on hoarfrost”. Although she is bravely honest, there is none of the self-indulgence of confessional poetry, even in her most biographical work.

In describing poetry, we often resort to short-hand terms to get information across efficiently. Women are frequently classed as poets of the ‘domestic’ if their primary concerns are those of relationships, emotional interiority or family life. Although Donovan has been referred to as a domestic poet, her work easily shrugs off this sort of classification. It is as informed by history, mythology and distant locations as it is by the immediate biographical details of her life.

Poems such as ‘At Queen Medb’s Cairn’, ‘Macha’s Curse’ and ‘Gobnait’s Shrine’ draw on Celtic mythology and seem determined to reclaim a wildness that is missing in modern life. These figures draw strength from qualities now considered undesirable in women: lustiness, largesse, anger, pride. The natural world, too, is revered in her work, and human beings are placed firmly within the taxonomy of wild animals. In many of her recent pieces she casts her eye on how her children interact with animals, and how her role as a mother is utterly instinctual. The fallacy of believing we are superior to, or outside, nature is driven home passionately in pieces like ‘She Whale’, which describes the harpooning of a “great creature”.

. . . what has she to fear
from tiny men?
If they fall from their vessel
she bears them up
to air, gently,
like her own young.
They are no bigger
than the flip of her tail . . .

She is often concerned about abuses of power, from the famine-era ‘Strike’ to strip-mining in ‘Hunger at Doolough’. She uses the poet’s voice as witness, letting those in control know that we are watching them. The poem ‘Entering the Mare’ is a stunning, disturbing portrait of the violent rites of power, about how often exploitation feeds the successful. As Eavan Boland said of Donovan’s work, “The tension in these poems is also their intent: they are discovering and making a private world which also manages, with real grace, to be inclusive and engaging.” Her readers are indeed engaged, and come away from her work with an examining eye, and a renewed commitment to look at trouble head-on.
© Jennifer Matthews
Bibliography

Another poem
An interview with Donovan
Katie Donovan’s website

Carrying My Father Up the Stairs