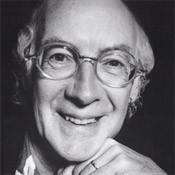 (England, 1937)
© Roger McGough
Biography
Roger McGough was born in Liverpool in 1937, and his career has been inextricably bound to his home city: he came to prominence in the 1960s as one of the beat-inspired, pop-movement ‘Liverpool poets’ – the other two being Adrian Henri and Brian Patten – and has represented Liverpudlian culture ever since.
It was the same Liverpool that was at the same time giving rise to the Beatles – indeed, McGough did uncredited work on the dialogue in the Beatle film ‘Yellow Submarine’ – and it was this atmosphere of joyous creativity and youth that informed the three young poets as well as the whole ‘Mersey Sound’. McGough has said, ‘The kids didn’t see this poetry with a capital p, they understood it as modern entertainment, as part of the pop-movement’.

The publication of The Mersey Sound: Penguin Modern Poets 10, featuring McGough, Patten and Henri, launched their brand of urban, contemporary, wryly amusing poetry into the public consciousness and made them famous. The book has sold over a million copies.

Since then, McGough has had a prolific and tireless career: playwright, children’s writer, performance poet, broadcaster. He has twice won the Signal Award for best children’s book, and his books for children are many and well-loved. As presenter of the BBC4 radio programme, Poetry Please, he is a household name. His adaptation of Moliere’s Tartuffe is currently touring to rave reviews, and he has a new book of children’s poems out, entitled Imaginary Menagerie.

His work is highly accessible, and specifically aimed at everybody, not just people who ‘understand poetry’. He is known for his quick wit and humour. ‘It took a while to have the confidence to be serious’, he has said. The serious side lies beneath, though: his poems capture the essences of everyday life, describing with good cheer what may be more bleak. His hallmark word play uses apparent humour to interrogate what is really going on, as in ‘Nine to Five’:

What I wouldn’t give for a nine to five.
Biscuits in the right hand drawer,
teabreaks, and typists to mentally undress. . .

In the second half, the words of the first are rearranged:

The same 2 kids. Somewhere to hang
your wife and shake your bit on the side.
Teabreaks and a pension to mentally undress. . .

This style of plain-speaking poetry, based on the lives and voices of people in the everyday world, has both ensured McGough a place in the public heart and has also been very influential on other poets. And his use of this kind of language breakdown in his children’s poetry, while being delightful, is also a subtle and good-humoured way of encouraging children to question the world around them. Is it this, or is it this? This makes McGough a driving force for children’s literacy in the UK. He was awarded an OBE for services to poetry in 1997, and a CBE last year, and was recently honoured with the Freedom of the City of Liverpool.

Roger McGough is an Honorary Fellow of Liverpool John Moores University and an Honorary Professor at Thames Valley University. He has an MA from the University of Northampton and D.Litts from the universities of Hull, Liverpool & Roehampton. He is also a Vice President of the Poetry Society.

Much travelled and translated, his poetry has gained increasing popularity, especially from its widespread use in schools. A prolific writer, he is twice winner of the Signal Award for best children’s poetry book and recipient of the Cholmondeley Award.
© Katy Evans-Bush
Select poetry bibliography

AWAY FROM YOU AS FAR AS I KNOW

As Far As I Know