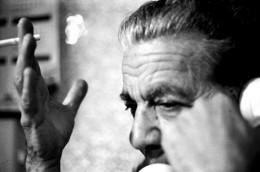 (United States of America, 1925 - 1994)
© Lilach Peled-Charny
Biography
Carmi’s background was international; he absorbed French and English, as well as Hebrew literary traditions. He was born in New York City, in 1925, into a family that spoke only Hebrew at home. When he began composing poetry in his early years, he had the bilingual aptitude of one whose first language – his writing language – was Hebrew, and his second the English of city streets. Carmi was graduated from Yeshiva University and began working toward an MA at Columbia University before leaving for Paris in 1946, where many of the major surrealists, including Breton and Eluard, lived and wrote.
After a year in Paris, he emigrated to Israel, where he served in the Defence Forces, and fought in the War of Liberation. In Israel, the poet’s utterance became at once literary and directly contemporary; he expressed formal ideas in language he heard in parks and cafes, from bartenders and taxicab drivers. He was familiar not only with biblical and midrashic tradition, but with the full range of Hebrew poetry. As editor of The Penguin Book of Hebrew Verse, Carmi read those texts for years to represent, in the anthology, an uninterrupted tradition n Hebrew poetry from biblical times to the present.

T. Carmi is a poet whose vision is at once historical and miraculous. He has, like others of his time and place, an acute awareness of human suffering, and he recognises the absurdity of individual lives in the context of social and political events. At the same time, his focus is intensely personal, and in many ways close to the surrealist mode of pursuing the marvellous in everyday life by discovering and using strange images close to subconscious thought.

From Grace Schulman’s introduction to At the Stone of Losses (1983), her volume of translations of Carmi's work.
© Grace Schulman
BIBLIOGRAPHY

As editor and translator
The Penguin Book of Hebrew Verse, London, Penguin, 1981; 2006

In German
To the Pomegranate Tree, Munich, Carl Hanser, 1991

A complete bibliography in Hebrew

AT ALL TIMES A PROMENADE MIRACLES LANDSCAPES THAT NIGHT

THE DEATH OF MY MOTHER