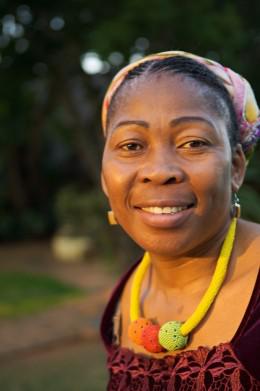 (South Africa, 1959)
© Victor Dlamini
Biography
Nokugcina Elsie Mhlophe was born on 24 October 1958 in Hammarsdale to a Xhosa mother and Zulu father. She matriculated at the Mfundisweni High School in the Transkei in 1979 and briefly worked as a housemaid in Johannesburg before beginning as a cadet journalist at Rhodes University. After a brief course in filmmaking she started as a newsreader for the Press Trust, BBC Radio’s Africa Service and ZBC.

Mhlophe went on to establish herself as a multi-talented multilingual actor and activist, poet and playwright, composer and director, infusing storytelling with poetry. Widely translated into all of South Africa’s official languages as well as internationally, into German, French, Italian, Swahili and Japanese, Mhlophe has received a terrific array of prizes and awards, including the BBC Africa Service for Radio Drama, the Edinburgh Festival's Fringe First Award, the Josef Jefferson Award, and the OBBIE. An ardent campaigner for literacy, Mhlophe’s endeavours in this regard have been recognised with honorary doctorates from the Universities of London, KwaZulu Natal, Pretoria and Fort Hare. Her guest appearance at the 2006 FIFA World Cup South African handover ceremony in Germany and the Arctic Winter Games in Canada, 2010, brought South Africa’s rich cultural heritage to the world’s attention.
*

When Gcina Mhlophe steps onto the stage she announces her entrance through ritual. And then you are drawn into the ritual: it holds on to you because she holds on to it, and you hold on to it too. The medium of announcement is usually a song, a familiar act – what speakers do at many African funerals. Called upon to deliver their eulogy, they rise from their seats among the democracy of mourners and begin a hymn that is taken up immediately by everyone. By the time the speaker reaches the podium, the community of mourners has accompanied him or her to it. They will be there until the end. The most accomplished speakers take more than their allocated time, because in their hands, time vanishes, forcing the Master of Ceremonies to hope that lesser speakers will make short presentations. ‘How to Take Your Audience with You and Buy Time’ could be the title of a performance manual inspired by this experience.

This ritualistic stepping into the performance space has become Gcina Mhlophe’s signature. She takes the audience into her performance of stories or poetry or drama through total movement: her body, her arms, the movements of her facial muscles, of her eyes, and the modulations of her voice: they all become one. Language and voice and movement converge into performance; and a reader of her poetry in her physical absence involuntarily invokes her presence.

The cover of the Journal of Southern African Studies (Volume 16, Number 2, June 1990) has a picture of Gcina Mhlophe on it. This picture was taken in 1987 during her performance in her play Have You Seen Zandile? at the Market Theater in Johannesburg. That was twenty-three years ago. While the energy and passion captured in the picture remain today, an authority and maturity – which set out not to prove anything nor to establish credentials, but rather to share a remarkable artistic life – now accompany them.

So, as I read her poems, it is impossible to resist the sense that I am listening to her; that I am watching her; and that in doing so I am being let into the artistic experience of a tested and accomplished artist that I’ve seen grow and mature in front of my eyes.

Whether reflecting on history, as in ‘Umlando Yinto Enzima’, or performing a tribute to O.R. Tambo in ‘Sikhokhele Mfo ka Tambo’, or calling for a loving and caring Africa in ‘Qinisani uthando’, she blends poetry, drama, storytelling and song in an unforgettable performance.

Rooted as it is in contemporary cultural practice, her poetry taps deeply into a resilient past. She uses the time-tested repertoire of mnemonics that are a definitive feature of oral poetry, and makes use of salutations, injunctions to the audience, changing meanings, repetition, alliteration, onomatopoeia, allusion, parallelism, play with noun class prefixes, and many other verbal techniques mostly recognised and admired by audiences as a mark of compositional dexterity.

In a country still very much a democracy in the making, African artistic forms continue to inhabit informal, unofficial and peripheral spaces of national life. They still come across as having to make a case for themselves. Historically, this is understandable. But there is a positive and organic revival underway. Gcina is part of the emergence, giving it shape and character. Interestingly, the Zuma presidency has been more catalytic at an organic level, as opposed to at a policy level. Much of the changes to the latter were laid during the Mandela and Mbeki presidencies.

For this current trend of artistic revival to be sustainable, it will require rigorous institutional support, though not steering. The infrastructure of cultural institutions needs to be as increasingly innovative and sophisticated as the arts that they have been established to support. Performing artists such as Gcina Mhlophe are constantly raising the bar, leaving government institutions so far behind that they have to change out of necessity, to escape irrelevance through their currently limited public accountability.

Gcina Mhlophe can be counted on to push the limits, and she always will.
© Njabulo S. Ndebele
Bibliography

HISTORY IS A HEAVY MATTER

LEAD US, SON OF TAMBO!