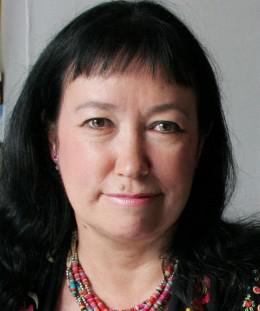 (France, 0)
© Jemimah Kuhfeld
Biography
Pascale Petit was born in Paris, grew up in France and Wales and lives in Cornwall. She is of French/Welsh/Indian heritage. Her eighth collection, Tiger Girl, from Bloodaxe in 2020, was shortlisted for the Forward Prize for Best Collection, and a poem from the book won the Keats-Shelley Poetry Prize. Her poems have been broadcast on BBC Radio 3 and 4, The Poetry Archive and Australia’s ABC Radio National, and published widely in journals around the world, including in Poetry, The Poetry Review, American Poetry Review and Quadrant. They have been translated into eighteen languages. Her seventh poetry collection Mama Amazonica (Bloodaxe, 2017), won the 2018 RSL Ondaatje Prize, was a Poetry Book Society Choice, was shortlisted for the Roehampton Poetry Prize and longlisted for the inaugural Laurel Prize. Four of her collections have been shortlisted for the T.S. Eliot Prize. In 2018 she was appointed as Fellow of the Royal Society of Literature. She is a recipient of the Cholmondeley Award from the Society of Authors and was the chair of the judges for the 2015 T. S. Eliot Prize. Trained at the Royal College of Art, she was formerly a sculptor.
Pascale Petit’s background as a sculptor is clearly felt in her poetry, where the link between the concrete and the imaginary is often emphasised; her poems effectively embody the imaginary, shaping it into distinct, tangible forms: “I ride a tower of blue horses / like a stained-glass window, / our haunches hard as lead crystal.” (‘Dispatch Rider’, The Treekeeper’s Tale). Petit trained as a sculptor at the Royal College of Art and her early career was as a visual artist. She has exhibited her work in many venues, including The Natural History Museum, and on London Underground. One of her images can be found on the cover of The Treekeeper’s Tale (2008).

Writing on the importance of imagery in poetry, Petit explains: “For me, image-making started with my training as a sculptor. [. . .] I expected sculpture to be a hard apprenticeship and it’s the same with poems, which, like the plastic arts, are apprehended through the body’s gates and need to be crafted to convince. I still feel I’m creating objects. I’m aware of the images, and think of each poem as a container, like Keats’s Grecian urn around which the poem’s pageant turns.” (Poetry News, Autumn 2008). As a poetic Pygmalion, Petit’s poems breathe life into the most inanimate objects, creating a world where the ordinary hierarchy between these and the human subject is often broken. In ‘At the Gate of Secrets’ (The Huntress), the poem’s narrator experiences a universe turned upside-down: “The furniture attacks me as I pass / Only you know how to herd the chairs / so they stop butting me with their horns. / The table legs kick me like restless colts.” This intrinsic connection between the tangible and the imaginary seems to permeate her work, which fluidly interrogates the space between the human mind, its body and the world it inhabits.

Painting similarly inspires Petit’s poetry, forming an important tangent in her work. Her fourth collection, The Treekeeper’s Tale (2008), travels through a variety of continents and natural habitats – Californian redwood trees, the frost-bitten tundra of Siberia, the yellow mountains of China and the Great War battlefields of France – as well as containing several poems inspired by the paintings of the German expressionist Franz Marc, and Surrealists René Magritte and Remedios Varo.

Petit’s interest in Frida Kahlo’s life and work has been the subject matter of two of her collections, The Wounded Deer –  Fourteen Poems After Frida Kahlo (2005) and most recently, What the Water Gave Me – Poems after Frida Kahlo (2010). Inspired by Kahlo’s work as much as by her dramatic life, Petit has said that her poems are attempted versions of Kahlo’s paintings, and reading Kahlo’s work alongside Petit’s enhances the experience of them both. In ‘Roots’, after the painting of the same name, Petit turns Kahlo’s bright-orange dress into a “cloth of fire” with “sun flares, plasma storms” that “spit and snarl”, changing the dress into a fire of creation out of which “I draw vines. / They shoot out from my hollows / leaves large as hands / that stroke the wound of my land.” Praising What the Water Gave Me, Ruth Padel writes “Petit’s collection, exploring the way trauma hurts an artist into creation, celebrates the rebarbative energy with which Kahlo redeemed pain and transformed it into paint.”

Petit’s poetry does not shy away from difficult subject matters, but delves into what she has called “private wars”. In an article for the New Welsh Review she lamented how “war is a worthy subject for poetry, but poems about domestic wars do not always get the same approval. Poets are often discouraged from writing intense personal poems, especially about extreme emotions. To do so is to court criticism for being self-indulgent and embarrassing. It’s much more acceptable to be ironic than emotionally direct. Writing autobiographically on traumatic subjects such as mental illness, domestic violence, rape, child abuse, infidelity, parents, suicide and alcoholism is seen as taboo in this highbrow art form, but not in fiction, memoir, biography, non-fiction and the media. I find it hard to come to terms with an art that censors itself so severely.” (‘Private and Public Wars’, New Welsh Review, Summer 2006).

Petit carefully joins stories of such ‘private wars’ together with mythologies and histories of ancient cultures into a thick poetic weft. Her second collection, The Zoo Father (2001) catapults the reader into an imaginary and emotional jungle, where the relationship between a dying father and the daughter he has abused is fought out. Spun around the imagery of the Amazon and the ancient mythologies of indigenous peoples, these poems anchor ‘private wars’ in a historical domain, equally spanning the personal and universal.

Similarly, her third collection, The Huntress (2005), offers a journey through myth and physical transformation, where the complex relationship between a daughter and her mentally-ill mother is deftly explored. The relationship between animal, human and the world of matter is nearly osmotic in these poems, creating a thrillingly shape-shifting universe. As in ‘Her Mouse Daughter’ where:

Mother’s fingers change into snakes,
her pupils narrow into vertical slits [. . . ]
And while I wait to be excused,
I shrink into the smallest animal
I even try to be what she says I am –
A mouse fed live into her cage.

Petit’s work leads the reader into an imaginary universe where deliminations between the human and natural world, object and subject, mundanity and myth, art and literature, are merged and erased. Of her work, Les Murray has said: “No other British poet I am aware of can match the powerful mythic imagination of Pascale Petit.” (The Times, 2006)

“No one writing in English today comes anywhere near the exuberance of Pascale Petit. Rarely has the personal and environmental lament found such imaginative fusion, such outlandish and shocking expression that is at once spectacularly vigorous, intimate and heartbroken.” – Daljit Nagra, Judge for the RSL Ondaatje Prize 2018

“The voice of Fauverie speaks both bravely and with bravura from the heart of its material. There is conspiracy in these poems and great beauty. They venture into the cellar of the past, summon up memory and conjure it into a firework display of metaphoric brilliance.” – Helen Dunmore, Chair of Judges for the T. S. Eliot Prize 2014
© Rebecka Mustajarvi
Bibliography

Pascale Petit’s website and blog
Petit’s publisher, Seren Books
Ruth Padel’s review of What the Water Gave Me in The Guardian
Petit’s online Poetry workshop for The Guardian
Zoë Brigley’s essay about Pascale Petit, ‘Confessing the Secrets of Others’, in the Journal of International Women’s Studies"}
Zoë Brigley also wrote her PhD thesis on the poetry of Pascale Petit, Deryn Rees-Jones and Gwyneth Lewis. It can be read here.
Pascale Petit writing about The Zoo Father

Remembrance of an Open Wound

What the Water Gave Me (VI)