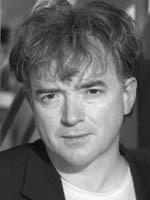 (United Kingdom of Great Britain and Northern Ireland, 1962)
© Nina Subin
Biography
Glyn Maxwell’s poetry is noted for its everyday vocabulary, used in tight metrical forms. His work is often concerned with the individual’s relationship to the community, expressed through narrators who are either outsiders or isolated within a group. In ‘The Play of the Word’, the narrator remembers the story of an unnamed ‘her’ — an outsider who stays in town for a short while, before she is forced out for not showing due respect at a religious play. However the narrator also seems to have been dislocated from his community by guilt, sympathy with ‘her’, and his new questioning of the society’s rules.
These internal isolations can be found throughout Maxwell’s work, particularly as he visits and revisits the idea of home. In Maxwell’s poems it seems that even at home we are never secure. In the words of the title poem from The Nerve: “somewhere in the side of the rough shape your life / makes in your town, / you cross a line . . . then you’re / suddenly very far from what you know.”

Maxwell has written extensively about America, notably responding to 9/11 and the resulting conflicts. However, he also brings his sensitivity towards British culture and history to many of his American poems. In his long poem The Sugar Mile Maxwell sets the days immediately preceding 9/11 against a narrative of the biggest loss of civilian life in UK history, during the London blitz, demonstrating how personal tragedies become incorporated into a national sense of history.

Plays and libretti have formed a significant portion of his work. His most recent project, The Lion’s Face, is a libretto examining the effects of Alzheimer’s. It focuses on one sufferer, Mr D, and the people around him, including his wife, a clinician, a care giver, and the care giver’s young daughter.

In the new work Maxwell continues to play with form: he challenges the operatic norm that all the characters always sing. Instead Mr D’s lines are spoken, while everyone else sings, as “a way of characterising the gulf between the person who no longer understands what’s going on around him [and reality]” (Glyn Maxwell, Channel 4 News, 17/05/2010). The Lion’s Face opened in May 2010 at the Brighton Festival and received the Argus Angel Award.

Glyn Maxwell was born in 1962 and grew up in Welwyn Garden City in Hertfordshire. He read English at Oxford before studying Poetry and Theatre under Derek Walcott at Boston University. His first collection, Tale of the Mayor’s Son, was published in 1990; since then Maxwell has gone on to publish nine books of poetry as well as novels, plays and libretti. He has been shortlisted for the T.S. Eliot Prize three times, the Forward Prize twice, the Whitbread Prize twice, and has received the Somerset Maugham Award (Out of the Rain), E.M. Forster Award and Geoffrey Faber Memorial Award (The Nerve). In 1997 Maxwell moved to America, living in Amherst (Massachusetts) 1997-2002 and New York City 2002-2006. In 2006 he returned to the UK and now lives in London.

The poems are published by kind permission of Picador; ‘The Lion’s Face’ is reproduced with permission from Oberon Books. Glyn Maxwell is represented by Micheline Steinberg Associates (info@steinplays.com).
© Holly Hopkins
Bibliography

Glyn Maxwell is published by Picador.

The Times heralds The Lion’s Face as a courageous piece of work.

The libretto of The Lion’s Face is available to buy from Oberon Books.

A Play of the Word