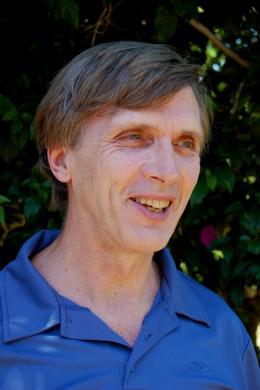 (South Africa, 1951)
© Liesl Jobson
Biography
In 1951, Kelwyn Sole was born into a lower-middle-class Johannesburg family. In a 1994 interview with Robert Berold in New Coin, he said, “I certainly wasn’t brought up in a liberal or leftwing household, although I was instilled with a very strong sense of justice and the uniqueness – let’s call it the vulnerable uniqueness – of all living things.” This early influence appears to have played a significant part in developing a meticulous awareness that pervades his aesthetic and political sensibilities. Although he identifies growing up in South Africa as the cause of a “fractured personality”, his writing is underpinned by an articulate consciousness that strives, unafraid and conscientious, for an honest and integrated portrayal of his world.
After matriculating from King Edward VII School in 1968, where his early talent for writing was recognised and published in English Alive, Sole commenced a BA at the University of the Witwatersrand and graduated with an Honours in English. The exposure during his studies to a wide range of disparate influences – music and Marxism, Zen Buddhism and banned material – further refined his distrust of white liberalism and forced him to forge his own political path.

Sole went on to the University of London’s School of Oriental and African Studies, where he completed an MA in 1975. Some twenty years later, he would be awarded a PhD for his studies in the ideology, culture and prose of the South African Black Consciousness Movement of the 1970s, also from the University of the Witwatersrand, but in 1976, reluctant to return to South Africa, he commenced teaching high-school English and African History in Kanye, Botswana. This was the year of the Soweto uprising, and the year his passport was confiscated by South African Police at the Botswana border. Sole would have to wait 14 years for its return.

After a brief stint as a freelance journalist, during which time he co-edited the literary journal, Donga, that would soon be banned by the increasingly repressive South African government, he relocated to Windhoek. There he worked for the Council of Churches in Namibia, initially as an education officer developing an English-language teaching project, and later as an administrator, until his expulsion from the country in 1980 under the Undesirable Aliens Act. Back in Johannesburg, Sole’s academic career progressed at the South African Committee for Higher Education, followed by appointments at the University of the Witwatersrand, Khanya College, and in 1987, at the University of Cape Town, where he is now a Professor of English.

A wealth of his writing is available online and poems like 'Mankunku', 'Housing Targets', and 'My Countrymen' give a flavour of the musical, philosophical and political dynamics that pepper his writing.

In his astute assessment of the interface between South African politics and poetry, ‘Licking the Stage Clean or Hauling Down the Sky?’ (Mediations, 2009), Sole writes: “Politics also has a habit of irrupting into daily life through the ways in which the political and economic choices made by the political leadership limit and shape the boundaries of experienced life. In essence, to conceive of South Africa as a ‘normal’ society now is as far-fetched as the prior pre-liberation dogma of apartheid’s supporters. One of the most enduring qualities at present seems to be an ambience of insecurity and instability.”

Against the relentlessly shifting uncertainty of the post-Mbeki era, Sole has continued interrogating the authorities with his reasoned and rapier-sharp discourse, unafraid to call poetry critics “nitwits” and the praise poetry of the ruling party “sycophantic”. Most welcome too is his vital and passionate determination to scrutinise and transform the individual choices that limit, shape and interrupt his own experience.

In ‘Games’ the spare voice of the child and the ancient grope concurrently for the essence of belonging, a consistent theme throughout Sole’s oeuvre.

‘Near Brandvlei’ explores the archetypal gesture of atonement and sacrifice and the impossibility of annihilating hope. ‘Gardening Tips’ is a searing comment on the arrogant resistance of those, steeped in white privilege, to move beyond paying lip service to an Africanised nation. In ‘Dream or Response’ Sole expresses the raw fear that is a visceral reality for many living in the country.

‘I Never Meant to Cross the River’ utilises the form of the ballad to subvert the lovesong into a lament, as much for the myriad individual maidens who face the torment of betrayal and AIDS as for the naïve who find themselves bewildered and abandoned by seductive promises that remain unfulfilled.
© Liesl Jobson
Bibliography

I NEVER MEANT TO CROSS THE RIVER