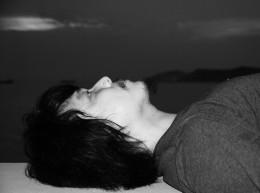 (China, 1971)
Biography
Fang Xianhai was born on one of the Zhoushan Islands (he doesn\'t like to specify which) near the coastal city of Ningbo, Zhejiang province in November 1971. In 1999, he graduated in print-making from the Chinese Academy of Fine Arts, but he developed his creative impulses in other directions, including both poetry and photography. His first poems were published in 2001 on the internet under the unlikely pseudonym of ‘Kouzhu’, a name made up the characters for ‘mouth’ and ‘pig’. His first published collections of poems was entitled Jintian yi si (Today Is Dead). In 2009, he set up the website Heishao (Black Sentry) to promote the publication and sales of avant-garde poetry.
On the whole, his avant-garde aspirations are manifested in terms of candour rather than difficulty. Although Fang\'s poems are readily approachable language-wise, they are often uncomfortable because of the subject matter they tackle. In the poem ‘In the School Toilets’, for instance, he strives to present feelings of acute personal embarrassment:

I aim myself at the urinal
holding my breath
but my prostate suddenly refuses to function
they stand there behind me sizing things up
leaning against a dirty white wall puffing away
and in the buzz of the nicotine
they\'re probably getting to grips with all the ins and outs of a teacher\'s cock
that done, they signal their common knowledge with furtive laughter

It’s interesting to think about why Fang does this. A clue, perhaps, is given in another poem in which he writes “singing as lacking in mystery as poverty”, a phrase that suggests a desire for directness or rawness rather than rhetorical flourish and imaginative elaboration. In ‘Waiting for a Phone Call One Afternoon’, he concludes with the statement “I allow myself in my imagination / to imagine a little more reality / but never, never a surreality”, a direct refusal of the overwrought invention associated with other styles of poetry. This realism has nothing of the ‘official’ about it: it is a realism of awkwardness, oddness, unhappiness, wrong-headedness, bewilderment. The poem ‘Jottings Made at 84 Longgu Road, Wuzhou’ suggest a certain maturity of outlook in which the so-called ‘beauty’ of living is perceived in the interplay of positive and negative features:

At the same time, there is a gently persistent tendency to see adult life as a betrayal of the promises of youth. The rotting cities, the urban ruins, the lacklustre kissing of a couple in a main street, the disbelief with which a book of poems gets treated by the passengers on a bus – all of these images hint at the overwhelming dullness of life thoroughly infected by narrow social ends. Fang protests against this in his own way, by presenting it as it is, and by adhering to his own version of fulfilment. That doesn\'t mean, however, that Fang’s poetry is predominantly sombre. No, the sour and the sweet are served up together for their complementary savours. He can pinch his lover\'s bottom “in secret admiration of its fullness” and he can gaze at the night sky till it lifts him from the Earth. He celebrates, in the midst of disaster, and seems to endorse the dolphins in his poem ‘Waiting for a Phone Call One Afternoon’ which “lavish praise on the life of waves / before they die”. There is, I think, in this an admirable, engaging, unheroic tenacity.
© Simon Patton
Bibliography

Jintian yi si (Today Is Dead): Self-published on the internet, 2008

ONE DAY ONE MONTH ONE YEAR JOTTINGS MADE AT 84 LONGGU ROAD, WUZHOU RUINS ROT WAITING FOR A PHONE CALL ONE AFTERNOON
Poems
Poems of Fang Xianhai

One day one month one year

Jottings made at 84 Longgu Road, Wuzhou

Waiting for a phone call one afternoon

This work of art

The birds are dead now

In the school toilets