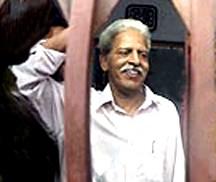 (India, 1940)
Biography
Varavara Rao (born 1940) – or VV as he is better known – is a well-known Telugu revolutionary poet, public speaker, literary critic, journalist and political activist. He is the author of nine collections of poetry, three volumes of literary criticism and a volume of essays. His poetry has been translated into almost every Indian language. His thesis, Telangana Liberation Struggle and the Telugu Novel: A Study into Interconnections between Society and Literature, is considered a significant work in Telugu literary criticism, and Varavara Rao is regarded as one of the finest Marxist critics in Telugu literature.
VV started publishing poetry in the late 1950s, and his first book was published in 1968. Inspired by the proletarian Cultural Revolution on the world stage and the Naxalite politics on the national scene, he entered into an engagement with politics and literature that was to deepen in intensity and commitment over the next five decades. VV worked as a college lecturer until 1988, and spearheaded an energetic literary magazine, Srjana, for several decades. During his many trysts with life in jail as a “prisoner of conscience”, he translated the work of Ngugi Wa Ngugi wa Thiong’o (the Kenyan novelist, activist and theorist of postcolonial literature) into Telugu, and wrote his own prison diary, Sahacharulu (1990). His varied literary endeavours of the past five decades were recently collected and published in a single volume.

His translator Dr D Venkat Rao (professor at the English and Foreign Languages University, Hyderabad) writes: “His life in poetry spans over half a century. From the ’70s till 2006, he spent protracted periods in prison for his political convictions. Convinced of poetry’s potential for redressing imbalances in the world where people are actually killed for their convictions, VV risked his life and writing over decades. He sees poetry, love and collective struggles as primal forces to contend with the violence unleashed by the state on the nameless and common people who begin questioning. No wonder he has made public his profound conviction in the ‘counter-violence’ of the Naxal-Maoist movement.”

What justifies his inclusion in this edition of PIW, however, is not simply the fact that he has been described as “the voice of millions of voiceless masses in Andhra Pradesh” or as “a name that inspires revolutionary fervour”. Rather, it is the fact that in the seven poems included here, there is evidence not only of commitment to a cause but commitment to craft. These are poems of anger, of outrage, biting indictment certainly. But there is also a palette of tonal variety. For VV is also a lyric poet whose work is capable of combining elegy with hope. As D Venkat Rao points out, “The poet is acutely sensitive to the functioning of language. For the poet, language and life inter-animate each other.”

An important preoccupation in VV’s work, his translator explains, is the politics of naming through which the poet raises questions about ownership of land and the unequal distribution of resources: “VV persistently raises questions about naming and these questions are inseparable from the critical issues of land, living and livelihood in his poetry. The question of naming appears poignantly in his poem on the police killings of Adivasis in Indravelli (in 1981): ‘Alarmed by the aborigine/ Evolving in the folds of the forest/ And the forest nestling in the frame of the aborigine/ It is you/ Who labelled them./ Fear-struck/ In Jodenghat and Pippaldhari/ Indravelli and Babejhari/ And in Satnala. . . / You wrecked their life/ Shored up with the bamboo./ . . . Can one mark which day/ The aborigine was born?’ (‘The Day of Naming’)”

Compelling images remain in the mind as one leaves these poems: of a poet’s last glimpse of his wife from “the escort van” that “roars/ and stirs up dust”; of the promise of justice when the scaffold dips and “hoists” the “hangman colonist”; and of a poet’s voice that cannot be silenced but finds its own subversive strategy to “purl out from prison grills”.
© Arundhathi Subramaniam
Bibliography

After All You Say

When the Moonlight Moves Into The Dark

The Day of Naming