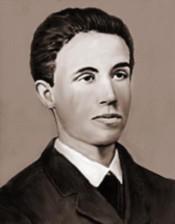 (Portugal, 1855 - 1886)
Biography
Son of a prosperous hardware dealer based in Lisbon, Cesário Verde was destined to take over the family business. He probably attended a commercial school and was also enrolled, for at least a few months, in the capital city’s Course of Arts and Letters. This young businessman, who handled the correspondence for his father’s firm, was to publish the first great modern poems in Portuguese when he was scarcely more than twenty years old.
Not many years later, at age thirty-one, Cesário Verde died from tuberculosis and without a book to his name. The poems he had published in newspapers and magazines had gone virtually unnoticed, and the scant critical attention they garnered was almost always negative. This was true even for his most famous work, the long poem O Sentimento Dum Ocidental (The Feeling of a Westerner), published in 1880 as part of a newspaper commemorating the tercentenary of the death of Luís de Camões. In a letter to a friend, Verde complained that his poem “did not receive a considered glance, a smile, a note of scorn, an observation”, except on the part of a Spanish critic who wrote that its verses “cut a poor figure in those pages imbued with such lofty national spirit”. Indeed the poem – which describes with an abundance of realistic detail an oppressive, asphyxiating and unhealthy city – was not in keeping with celebratory spirit of the publication in which it appeared. The poet himself explained to the editors that he wanted to depict “the present state of our great Lisbon which, in relation to its glorious past, seems but the corpse of a city”. This sombre vision is attenuated throughout the poem, however, by virtue of the poet’s acutely focused gaze, not because he romanticises what he sees but because his dazzling, unexpected associations of images – juxtaposed according to a method suggestive of techniques employed decades later by expressionist cinema – confer a precarious transcendence on what would otherwise be merely a crude picture of human misery in a city entering into the industrial age and with a population growing at an unprecedented rate.

The kind of “social concern” evinced by this poem is atypical for its time, and somewhat atypical for any time is the poem’s marvellous unconcern to be so concerned. In its 176 verses there is not the slightest hint of condescension. The narrator is a flaneur, in the manner of Baudelaire (a poet read and much admired by Cesário Verde), wandering through Lisbon’s older neighborhoods as the evening falls and gradually gives way – by the poem’s fourth section – to the deep, “dead hours” of night. Many of Verde’s poems, set in the rural outskirts of Lisbon, are illuminated by the clear light of day, but here he visits Lisbon’s darker, nocturnal side, for no other reasons than to “show and examine what’s real”, to “seek and attain the perfection of things”, and to record the feeling of a visually and emotionally alert westerner who happens – without a program, without a mission – to hope for a better future.

Given that The Feeling of a Westerner is widely regarded as the greatest Portuguese poem of the nineteenth century, a masterpiece on a par with some of the best lyric poetry of Camões and the great odes of Fernando Pessoa, who spared no praise for the work of his precursor, it may seem strange that it had to wait until now – almost 130 years later – to be rendered into English. This is no doubt due in part to the difficulty of the task. Without obvious poetical raptures, the poem’s plethora of concrete references and images, organised into tightly metered and rhymed stanzas, pose an unusual challenge to the translator. Richard Zenith, while foregoing end rhyme, has made free use of internal rhymes, assonance and alliteration. And rather than replicate the unusual stanzaic structure of the original – quatrains consisting of a decasyllable followed by three alexandrines – he has adopted tetrameter throughout, in an effort to sustain the poetic momentum.

In his brief life Cesário Verde wrote about forty poems. Soon after his death, a friend named Silva Pinto published close to half of them in a volume he entitled O Livro de Cesário Verde (The Book of Cesário Verde). Since he surely had nothing like a finished manuscript at his disposal, we may assume that Silva Pinto was responsible for structuring the book and for introducing various changes in the poems. Almost all of those changes are, remarkably, right on the mark, leading critics to suspect that the friend and posthumous editor had some special information, or had discussed the poems closely with their author.
© Miguel Queirós (Translated by Richard Zenith)
Poetry
In Portuguese
O Livro de Cesário Verde, Silva Pinto’s edition, Lisbon, 1887
Obra Completa de Cesário Verde, Portugália, Lisbon, 1964
Obra Poética e Epistolografia, Lello, Oporto, 1999
Cânticos do Realismo e Outros Poemas, Relógio d’Água, Lisbon, 2006

THE FEELING OF A WESTERNER
Poems
Poems of Cesário Verde

The Feeling of a Westerner