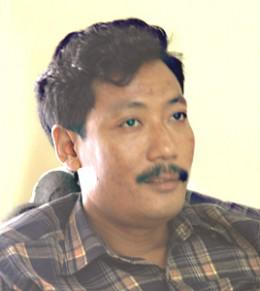 (India, 1970)
Biography
Jiban Narah (born 1970) is the author of six books of poetry in Assamese. Considered a popular and influential poet in his home state, he has been translated into other Indian languages, including Bengali, Hindi, Manipuri, Marathi, Oriya, Gujarati and Tamil. A book of English translations of his poems, The Buddha and Other Poems, appeared earlier this year. He is also a writer of fiction and essays. He works as a college lecturer in Nagaon, Assam.
Born in Morangial, a remote village in the Golaghat district of Assam, Narah grew up under the twin influences of Mishing tribal culture and the Assamese mainstream culture.

The Mishings, he explains, are an indigenous riverine tribe; they inhabit both banks of the Brahmaputra River in upper Assam. Predominantly agricultural and known to many by the distinctive bamboo homes on stilts in which they live, they have a rich, traditional heritage with a variety of folk songs and myths. While Narah has emerged from what he terms “the confines of his ethnic identity”, he acknowledges that his poetry draws in many ways from his tribal cultural background.

In an interesting interview that accompanies this edition, he positions himself as a modern Assamese poet, one who stands on the threshold of his ethnic identity and inhales the fresh breeze of a composite Assamese culture and the world. The image of the river is vital in Narah’s poetry. While it draws from his own Mishing background, it also seems to suggest a capacity to view himself as equally connected to both source and mainstream.

This edition features five of Narah’s poems, translated by Pradip Acharya and Krishna Dulal Barua (with inputs by Aruni Kashyap). Imagistic and musical, they are enriched by a range of eclectic references: from Mishing myth to Assamese popular songs, from Alphonse Daudet’s short fiction to Buddhadev Dasgupta’s cinema.

Narah’s poem, ‘Words’, combines a spirit of yearning, lament and philosophical resignation. Even as the writer gropes for poetic inspiration, aching to touch the shape and contours of words again, he knows there is no guarantee that it will revisit him. He admits to his desperation. He needs words. He is frightened of being abandoned by them. But even if they did reappear, he knows that he will never be the victor. He yearns for them, aware all the while that it is his lot to be overwhelmed, vanquished, flooded, submerged. Silence, he knows, is every word-lover’s final destination.

‘Poetry’ is a particularly evocative poem in which the poet encapsulates the paradoxes of his art in a few spare couplets:

Aware that the birds aren’t trees
yet you plant birds.

There is no triumphant vindication of the creative art here, however. Instead, the lines are pervaded by a strange melancholy, due, no doubt, to the writer’s awareness that he will never reach the “other bank” where poetry seems to lie. The poem ends with a particularly disquieting image: “a bird slowly dying/ a pair of eyes slowly beginning to yellow.”

My personal favourite in this selection is ‘Farewell’, a lament for a sister who has left home with her beloved. There are no surprises in the sentiment expressed: this is a conventional lament by a brother, as he wanders through the empty room that his sister once inhabited. But what makes the poem work is the absence of any easy local colour or doctored innocence. There is a simple musicality, a fresh use of image and a flavour of understated elegy that makes it reminiscent of a traditional folk song. There is also an aphoristic ring to the mysterious, yet delightful lines: “As she loved the silk cotton tree/ she never lied to the river.”

She may have taken the boat downstream, but what the boy’s sister leaves behind is a haunting legacy of word and melody: the notes of her songs echoing in the “impossible emptiness” of the family home. For all his unease about words, one realises that those lines could well point to Narah’s own fascination with the art of poetry: the need to leave behind a roomful of musical notes before being overwhelmed by that inevitable “silent land forever”.
© Arundhathi Subramaniam
Selected Bibliography

Also on this site

An interview with Jiban Narah