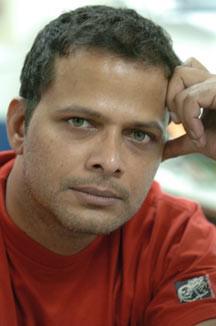 (India, 1966)
© Ashima Narain
Biography
Jerry Pinto (born 1966) is a writer of poetry, prose and children’s fiction in English. He is currently at work on various projects, including short fiction and a novel. His collection of poems, Asylum and Other Poems appeared in 2003. He has also co-edited Confronting Love (2005), a book of contemporary Indian love poetry in English. His poems have appeared in journals and anthologies, including Reasons for Belonging: Fourteen Contemporary Indian Poets and Fulcrum: An Annual of Poetry and Aesthetics. He lives in Mumbai.
A seasoned journalist, he writes widely and engagingly on a range of subjects, from language to the city, from books to popular culture. His books of non-fiction include a humourous manual for confused Indian men (Surviving Women) and an award-winning book on Helen, the dance diva of Bollywood. As anthologist, he has edited a book on Goa and co-edited a book on the city of Mumbai.

To those accustomed to Pinto’s wisecracking humour as a journalist, his poems might come as something of a surprise. The poems in Asylum grapple with a welter of contradictory emotions. The result (to quote from my review, Kavya Bharati, 2004) is “poetry that allows itself awkward angles, edges, jagged pauses, hoarse moments, uneasy alliances between imagistic spareness and excess. There is a capacity for vulnerability, for self-implication, an acknowledgement of a soiled self that finds it difficult to forgive itself.”

The five poems chosen for this edition confront themes of word and language in interesting ways. There is a poem that offers a comic-apocalyptic vision of the revolt of paper. The result is a dystopia where poetry is “replaced by Reader’s Digest mailers” and where illuminated manuscripts commit hara-kiri “in kamikaze squads”. There is ‘Alphabet Soup’, a quirky conceit poem on the letters of the English alphabet. There is the poem about clearing one’s desk of an entire freight of words – burying an entire cargo of ambition and memory that can induce embarrassment, recoil, contempt, loathing. Only after that act of furious rejection can one await the Dickinsonian “formal feeling”. There is ‘Prayer’, a formal entreaty to be freed from the tendency to ‘boom too much’ and whisper too shrilly. And finally, there is ‘Our Trade’ (a previously unpublished poem), an energetic rant that invokes a golden age when poets were not just “rock stars”, but objects of collective yearning and veneration (representing ‘memory’, ‘history’, ‘ritual’ and ‘community’). But the bleak reality that the poet now conjures is one where words “pour in a thick sludgy militant flood out of every profligate mouth”.

What makes Pinto’s stand unusual is that he does not set himself up as mere witness of this historic debasement of the imagination. Instead, he acknowledges that he is also culpable in perpetuating this largesse of waste. When he tells young poet aspirants to ‘RUN’, this is not the lofty advice of a sage bard and oracle, but the admission of a wry, weathered word-merchant, aware that his hands are as soiled as the next person’s.
© Arundhathi Subramaniam
Bibliography

The Quiet Rebellion of Paper