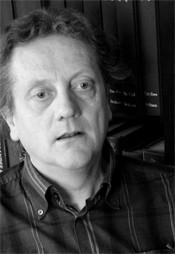 (1953)
© Jan van der Waal
Biography
L.F. Rosen made his debut in 1994 with the collection Adel, published by Van Oorschot, which earned him a nomination for the C. Buddingh’ prize. Many collections have followed since then, the most recent of which, entitled Droomvlees (Dreamflesh), was published by Wagner & Van Santen. In 2005, he received the Poetry Day Award for his poem ‘The Bed’.
Rosen is a worldly and autumnal poet who rarely raises his voice, but thinks ahead in restrained, sultry lines. A melancholy poet, but one with a pleasantly sharp edge. The language he uses is always flexible, expressive and extremely succinct. Rosen understands his métier and knows how to string sounds together in an unobtrusive as well as ingenious way.

A retiring poet, then, although this does not make him a self-effacing one. He examines life in all sorts of ways, paying attention, for example, to its transience and possibility of a hereafter – in no way small-scale themes.

He elaborates on this subject elegantly in the poem ‘Their nakedness’, in which the souls of the departed are clad and equipped before they climb the mountain (of purification) which leads to heaven’s gate. Their nakedness could, after all, thoroughly distract the prudish inhabitants of heaven. An amusing reversal, of course. Even the soul, man in his most spiritualised form, has in Rosen’s perception a body capable of causing a fuss. In this poem, he reveals an interest for the physical side of life, something that is also typical of many of his other poems.

In Rosen’s poetry the flesh enjoys considerable autonomy, changing of its own accord throughout life. Rosen ascribes an individual consciousness to the body, each organ of which can even be addressed. In the poem ‘Lung functions’ he sings the praises of the lung as the body’s most exciting organ:

So noble is its character
That it relishes equally
heady tobacco
and deadly oxygen.

With utter certainty, dependent as we are on that very thing that keeps us alive, life passes – though not without certain pleasures.
© Jan-Willem Anker (Translated by John Irons)
[L.F. Rosen appeared at the Poetry International Festival, Rotterdam in 2009. This text was written for that occasion.]

JUBILEE SHELTER LUNG FUNCTIONS THIS IS HOW IT WILL BE HUMANITY, FOREVER DRILLING

THIS IS HOW IT WILL BE