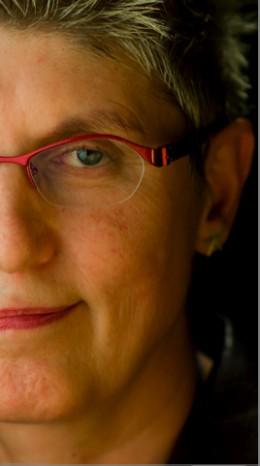 (The Netherlands, 1950)
© Sander Nieuwenhuys, 2008
Biography
Maria van Daalen made her début as a poet in 1989 with Raveslag (The Beat of the Raven’s Wing), which was shortlisted for the prestigious C. Buddingh’ Prize in 1990. Six more volumes of poetry and a collection of short stories and essays followed. Besides being a poet, Van Daalen is one of the very few experts on Vodou in the Netherlands and she is currently working on a ‘grand essay’ about Haitian Vodou, Le Miroir des Mystères / Spiegel van Mysteriën (Mirror of Mysteries), to be published in 2009. In August 2007, Van Daalen was the first Dutch person to be officially initiated as a Mambo Asogwe (the highest rank of priestess in the tradition of Haitian Vodou) in Port-au-Prince, Haiti. Since then, she has been an adviser to the Royal Tropical Institute, Amsterdam, for an exhibition of Vodou art objects, entitled Vodou / Art & Mysticism from Haiti (November 2008–May 2009).
In her most recent collection, De wet van behoud van energie (The Law of Conservation of Energy, 2007) Vodou indeed plays a recognisable role. But in a more general way, spiritualism and metaphysics have always been part of Van Daalen’s writing, though this is not to imply that she ever really loses touch with tangible reality. The magical and the palpable are simply part of the same reality, or, as she puts it herself in a recent interview with an Indonesian newspaper, “as a poet I am always living on what is real to me, which includes the magical”.

Other subjects in Van Daalen’s poetic universe include physical and spiritual love, the struggles between different bodies and between body and mind, the mechanics of memory, the power of language and the act of writing (and reading) poetry. Many of her poems seem to be fuelled by either strong desire or a sense of violence, sometimes both at the same time. Formally, Van Daalen preferred free or blank verse in her first collections, but since her fifth collection, Elektron, muon, tau (Electron, Muon, Tau, 2000), she also frequently writes sonnets.

From the Nineties onwards, more or less since she published her third collection, Het Hotel (The Hotel, 1994), Van Daalen has taken part in various international writing programmes, foreign writer-in-residence projects and poetry festivals. For both long and short periods of time, she has lived in the USA, in Canada and in Greece, and she has read her poems on stages from Sarajevo to Cape Town; Kuala Lumpur to New York. Currently she lives in Almere, a town near Amsterdam, and teaches at the Schrijversvakschool, the academy for creative writing in Amsterdam.
© Thomas Möhlmann
Bibliography

Translations of Van Daalen’s poems have appeared in publications including:

Van Daalen at VPRO including audio

An interview with Van Daalen on The Jakarta Post

A REBÉTIKO FOR FRANS VAN HASSELT

THE LAW OF CONSERVATION OF ENERGY