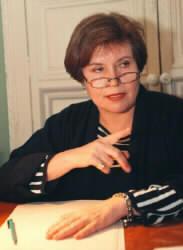 (Colombia, 1945 - 2003)
Biography
María Mercedes Carranza was born in Bogotá in 1945, the same city where she took her life in 2003. From an early age onwards, she was surrounded by poetry because her father, the poet Eduardo Carranza, met his friends (among whom were Dámaso Alonso and Pablo Neruda) in his living room to sing verses to life.
For most of her childhood, Carranza lived in Spain, returning to Colombia for good at the age of thirteen. She studied philosophy and literature and published her first book of poems, Vainas y otros poemas, in 1972. Carranza focused in her poetic search on finding the exact word to name each thing and her most intimate feelings, because she thought that the Word “became/a liar, a whore, stubborn” and that “it is time/ for her to take off her make-up and begin to name not what is/ God’s nor what is/ Caesar’s, but what is ours/ day after day . . . ” Thus, as the poet Darío Jaramillo says, the poetry of María Mercedes Carranza is “devoid of any subterfuges, of any concealing glitter, of all lies, voluntary or not.”

For 16 years, Carranza was the director of the Casa de poesía Silva. Through it, she dedicated herself to teaching Colombians that “words can replace bullets”. She did much to promote the poetry of the great nineteenth-century Colombian poet José Asunción Silva; and she created mass events so that the people of Colombia could get “great doses of poetry”, because according to her “poetry helps you to live”. In addition, she was a member of the National Constituent Assembly that drew up the new Constitution of Colombia in 1991.

Her last book, El canto de las moscas (versión de los acontecimientos), consists of a lyrical, unadorned series of short poems facing the violence suffered by the country. The poet Mario Rivero says that this book has become “a painful war dispatch” where the poet succeeds in “wisely constructing the essential expression of essential facts (. . .) the daily savagery in a community besieged by death.”
© Melibea Garavito
Bibliography:
Vainas y otros poemas (A pain in the ass and other poems, 1972)
Tengo miedo (I am afraid, 1982)
Carranza por Carranza (An anthology of her father’s poems, 1985)
Hola, soledad (Hello, loneliness, 1987)
Maneras del desamor (Ways of love lost, 1993)
El canto de las moscas ( The song of the flies, 1998)


Websites on Carranza
In Spanish:
The House of Poetry Silva
Poems
Essay by Juan Liscano

Head over heels with life

If you want love
let it follow its whims