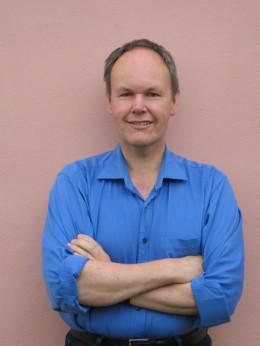 (United Kingdom of Great Britain and Northern Ireland, 1956)
Biography
James Harpur was born in Britain in 1956 to an Irish father and a British mother and now lives near Clonakilty in Co. Cork. He studied Classics and English at university then taught English on the island of Crete. Many of the poems of his first collection, A Vision of Comets, published by the British poetry house, Anvil Press, take their inspiration from his time on Crete and from the Aegean area.

Harpur has published three further books with Anvil, The Monk’s Dream, Oracle Bones and The Dark Age, as well as a translation of the poems of Boethius, Fortune’s Prisoner. He has been well represented in anthologies, including Staying Alive (Bloodaxe), and has won a number of awards, including the British national poetry competition in 1995. He has also published a book of mixed prose and poems called The Gospel of Joseph of Arimathea (Wild Goose) and a non-fiction introduction to the Christian mystics, Love Burning in the Soul (Shambhala). He is the poetry editor of Southword, one of Ireland’s leading literary periodicals, and the Temenos Academy Review, founded by Kathleen Raine.
Harpur is essentially an interior poet with a fascination for spirituality, and his poems are full of references to Christian as well as to other religious traditions. Stylistically, he has a deep sympathy with the mythopoeic strand of poetry, from Homer, Virgil and Dante to the Romantics and Yeats, Eliot and Ted Hughes. His non-literary influences include Carl Jung and J. Krishnamurti. Although many of his poems are clothed in the trappings of the past, his concerns – the human condition, the nature of the psyche, the yearning for spiritual meaning – are both contemporary and timeless.

Harpur is concerned with poetic craft and often displays regular metrics and rhymes and half-rhymes. One stylistic hallmark is the use of first-person voices to articulate psycho-spiritual states of being. This can be seen in his second book, The Monk’s Dream, where the ‘voice’ of Lazarus recounts the mysterious process of dying and coming back to life, only to eke out an existence of infamy and listlessness. Oracle Bones takes this fascination with monologue further. A range of diviners, visionaries and soothsayers (including an Assyrian extispicist) explore the nature of inspiration and prophecy. At the heart of the book is ‘Dies Irae’, Harpur’s most ambitious work, in which a Dark Age churchman laments the end of the world as he knows it, gaining consolation from the memory of a moment of ecstasy he was once graced with.

The Dark Age, Harpur’s fourth book, continues the theme of spiritual darkness. A central sonnet sequence about early medieval Irish saints is balanced by more overtly personal poems about love, birth and death. A long poem, spoken by the Syrian pillar hermit, Symeon Stylites, voices the internal struggle of the religious ascetic (and, by implication, of the artist) seeking seclusion, despite an inevitable need for humanity. Two poems extracted from a work-in-progress about the Book of Kells suggest that Harpur’s focus is shifting to the nature of sacred art, the mystery of inspiration and the artist’s tension in trying to articulate the Inarticulate.
© Patrick Cotter
Selected Bibliography

Non-fiction
Love Burning in the Soul: the Story of the Christian Mystics, Shambhala, Boston, 2005

Irish radio interview with James Harpur about The Dark Age

Review of The Dark Age by Grace Wells

‘I Stretch My Arms’

The View from Heaven

Kevin and the Blackbird