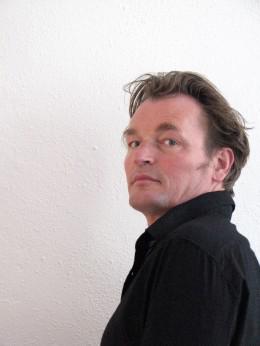 (The Netherlands, 1960)
© Poetry International
Biography
Henk van der Waal writes poetry with a melodious, eroticising use of words. In his poems, those words often have a forward-propelling effect. What is striking is that he does not shy away from intelligence or erudition. Van der Waal is classical and modern in one.

He made his debut in 1995 with the collection De windsels van de sfinx (The Sphinx’s Swathing Bands). “The lines themselves consist of long sentences that could be conceived as swathing bands. These swathing bands of words, when unravelled, revealed an enigmatic silence,” essayist Maarten Doorman wrote.
On the surface, Van der Waal’s poems often appear to be like fretwork. Diamond-shaped, funnelling downwards with diminishing lines, or upwards with increasingly long lines, in blocks, or on one occasion as an ‘undercarriage’, with two lines pushing forwards round central bars. Within that fixed form, his language teems. For van der Waal, writing would seem to be an engagement, an incantation. Spiritedly, blissfully, he throws himself into the fray. Dutch critic Piet Gerbrandy wrote: “the poems are objects that via their visual space radiate a certain inaccessibility: they are there, and that is perhaps even more important than the fact that they can mean all sorts of things.”

For his debut collection, Henk van der Waal was awarded the C. Buddingh’-prijs. In that collection, the poet addresses one newly born: “you realise/ of course that where we promise you solid ground/ and beacons// there is a quagmire of/ sprawling language in which/ you cannot swim, nor yet walk on.” The mistrusting of the language that is the poet’s material is characteristic. He operates on ground that is on fire.

Despite this, what Van der Waal provides in his poetry is not a hopeless exercise, one where the author is left out of account. It is his intensity which ensures that his work reverberates, sinks in and remains personal. Literary critic Koen Vergeer wrote the following about the collection De aantochtster (The Woman Approaching): “This collection is so rich, so full of ideas, marvellous long sentences, rhythm, pathos, incantation.”

Henk van der Waal studied medicine and subsequently philosophy. He has worked as a journalist and translator. He teaches in the Image and Language Department of the Gerrit Rietveld Academie. In his essays, he explores the nature of poetry, its urgency and what it is capable of. In doing so, he makes frequent references to such thinkers as Maurice Blanchot, Julia Kristeva and Alain Badiou. His most recent collection Vreemdgang (Unfaithfulness) appeared in 2007.
© Erik Lindner (Translated by John Irons)
Bibliography

without, you\'re a prey to yourself . . . apart from chance you\'re silence too developed . . . nothing, not hard work or watching . . . OR LIKE THE FOURTH PERSON SINGULAR

nothing, not hard work or watching . . .