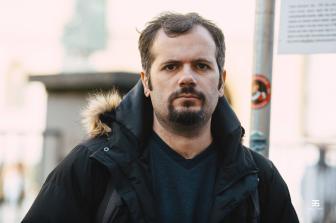 April 01, 2020
Radu Vancu (b. Sibiu, Romania, 1978) is a Romanian writer, scholar and translator. An associate professor at the Lucian Blaga University in Sibiu, he is president of the Romanian PEN Centre, editor-in-chief of the Transilvania magazine, and an editor of the Poesis Internațional magazine.
The organizer of Poets in Transylvania, Sibiu's international poetry festival, Vancu has published eight books of poems (2002-2019), a novel, Transparența (2018), a diary (2015), and six books of criticism and literary theory (2007-2016). He has translated from the works of Ezra Pound (an on-going four-volume project), John Berryman (a selection from the Dream Songs) and W.B. Yeats (prose).