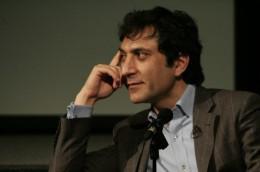 March 13, 2015
Abol Froushan left the Shah’s Iran to live and study in London in 1975. In 1979, he received his BSc in mechanical engineering from Imperial College, University of London, which was followed by an MSc in social and economic studies. He was awarded his PhD in fluid dynamics from Imperial College in 1986. Abol acquired a British passport on Valentine’s day, 1990. Inside it was written “Place of Birth: Tehran, 10/10/1957”.
Abol began writing following an encounter in 1983 and has since been pursuing a career in writing, performing, recording, translating poetry for events, video and audio recording, and publications in collaboration with literary artistic organisations. In 2001, he was Poet in Resident at the BBC Outlook programme, representing Artists in Exile, and in 2011 he was selected as the Chair of Exiled Writers Ink! He pursued a strategy conducive to community cohesion through literary events, workshops and projects, for instance Something Happened in Iran  (a narrative on the green movement choreographed through poetry in multimedia) at the Free Word Centre.

In October 2011 Abol joined the list of thirty poets whose work was recorded for the British Library Sound Archives as a part of the Between Two Worlds: Poetry and Translation project. He has over three hours of poetry and interviews recorded for the Sound Archives (fifty poems, including his translations of Ali Abdolrezaei). Two collections of Abol’s poetry have been published: A Language Against Language (in English; EWI, 2008) and the bilingual volume I Need Your Desert for My Sneeze (Persian and English; PoetryPub, 2009).

He has also published two volumes of English translations of Ali Abdolrezaei’s work: In Riskdom where I lived (EWI, 2008) and Sixology (PoetryPub, 2010). Other published translations of Abol include Parham Shahrjerdi’s Risk of Poetry, by Poetry Pub. Abol has been published in the anthology Silver Throat of the Moon (ed. J Langer and the Exiled Ink magazine), as well as in multimedia web-based publications at photoinsight.org.uk and poetrymag.info. He has publicly performed his poetry in select London venues such as the Queen Elizabeth Hall, the National Portrait Gallery, the Poetry Café, New End Theatre, Arcola Theatre, the Waterman Centre, Scala Theatre and Riverside Studios.