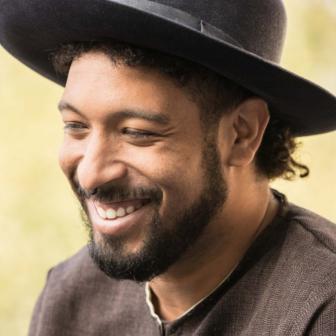 (The Netherlands, 1984)
© Irwan Droog
Biography
An erupting volcano – that’s the image that comes to mind when you see Dean Bowen on stage. The poems in his 2018 debut Bokman (Goatman) are no less impassioned. Bowen was immediately recognised as a unique and necessary new voice in Dutch poetry. His work is both moving and politically charged.
Bokman can be read as a search for identity – or rather, a dissection of the layers that go to make up this complex term. What shapes a person? What shaped Dean Bowen? Language, family, origins, the diaspora. In a cycle of poems that bears his own name, Bowen returns to his Surinamese roots,  recounting the country’s history – the indigenous population, the colonial oppressors, the Maroons, the slaves: ‘i know the stories of this water before it was water for plantations.’

In this furious, polyphonic collection, language follows its own logic and grammar. The disjointed structure of the lines of his poems is not accidental. Just as the abolition of slavery in Suriname is commemorated every year with the celebration of Keti Koti (‘broken chains’), Bowen frees the Dutch language from its constraints. Instead, he mixes different languages to create something new, similar to the way Sranantongo and Papiamentu came
about: ‘our guilt, an unknowing dat we koesterden in het langgeleden.’ (that we cherished in the long ago) Bowen’s debut was nominated for the C. Buddingh’ Prize for the best poetry debut. Bokman is a confronting collection that forces the reader to reflect on their role in history, their position in the debate about racism, the Dutch colonial past, heritage and identity. Straddling multiple continents, Bowen masterfully untangles his origins.

The scent of magnolia