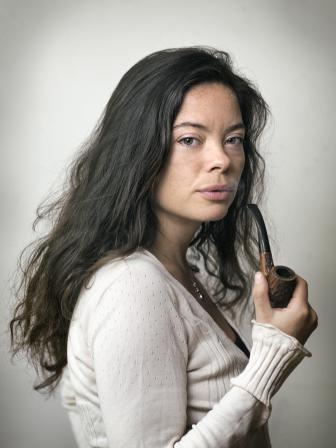 (The Netherlands, 1984)
© Tessa Posthuma de Boer
Biography
In an interview with Abdelkader Benali, Petzoldt responded to the question of how to characterize her work by saying her poems are both ‘feeling and confrontational’. That these characteristics may be applicable is suggested clearly by the title of her debut collection alone: Vruchtwatervuurlinie [literally: amniotic fluid line of fire]. Innocence and threats are caught in concepts that are usually associated with babies and soldiers. This contrast between feeling and confrontation is found not only in the themes, content and direction of the poems, but also in their language, phrasing, and structure.
In the poetic universe she creates in Vruchtwatervuurlinie, reality is regarded in a sharp, analytical, and associative manner. Reality as it presents itself to us now (‘I know that people look like their dogs, but you / look like someone else’s dog') as well the reality we remember from our youth, in which there is still so much space for fantasy and exploration. Roberta Petzoldt shows how, when we look back upon our personal history, the pain of absence is also felt, as for example in the poem ‘Before you know it’: ‘I saw how my childhood was finite / felt homesick for the self who had these thoughts’.
Petzoldt has a knack for identifying and describing ordinary everyday occurrences like waking up in the morning, or seeing and hearing a lark. In the poem about the lark, Petzoldt shows herself to be conscious of the poetic tradition in which the lark frequently featured (‘But how do I write a verse about a bird / that has been sung about so often’). In other places, too, literary tradition resonates in her work, as in ‘Pixel perspective’, in which the echo of Remco Campert’s poem ‘Someone poses the question’ can be heard.
Every poem in the collection is an affirmation of what the poet understands as poetry, but perhaps Petzoldt’s own understanding of poetry is expressed best by the lines: ‘touching the clouds without an airplane / moving by the grace of / a trained sense of humour / a solitary logic.' Duly noted.
© Jan Baeke (Translated by Fleur Jeras)
Links

Before You Know It