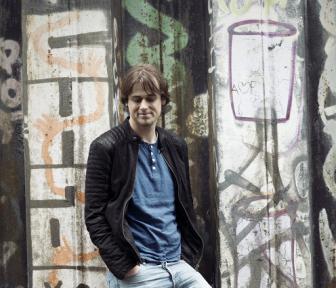 (The Netherlands, 1987)
© Geert Snoeijer
Biography
Jonathan Griffioen (1987) was born in Amsterdam and grew up in Wijk bij Duurstede. He writes about growing up in this small provincial town in his first collection Wijk [District] (2015), which was nominated for the C. Budding’-prize. Griffioen made it into the semi-finals of the NK Poetry Slam 2015. His second collection, Gedichten met een mazda 626 [Poems with a Mazda 626] followed in 2018 and was awarded the J.C. Bloemprijs 2019. It was also long listed for the Grote Poëzieprijs 2019.

Griffioen’s first collection Wijk offers up a panoramic view of a teenager’s life. In five long and meandering poems, each ending with a sort of pause, the poet sketches teenagers hanging out on street corners, in small squares and at empty bus shelters. This is where they watch girls – “tight zips with iron tongues and breasts stuffed with socks” – while their mothers lean from their balconys like “flowerpots”, keeping an eye on things. The poems aren’t realistic but strongly associative. Griffioen scrutinizes his youth in a stream-of-consciousness like flow of images and thoughts. His poetry turns from the descriptive to the lyrical, using the repetition of single words and lines to establish rhythm and musicality.

There is an observing and solipsistic strength at play in Griffioen’s work that allows the reader access into the mind of his protagonist. Without reservation, the poetic persona takes the reader on a tour through the different layers of his consciousness. This approach is further developed in Gedichten met een mazda 626 [Poems with a Mazda 626]. The solipsism has clearly been turned up a notch, if only because in this filmically written collection the poetic persona is on the autism spectrum. A narrative has been woven into the poems, which helps sustain a sense of cohesion: the poetic persona stays awake for 40 hours thinking about his dead friend Jimmy who used to drive “a red Mazda 626 from 1990”. Memories of his special-needs school in the forested parts of central Holland and the therapies he had to go through are alternated with memories of Jimmy and visions of a resurrected Jimmy who

At times it is as if Jimmy is being celebrated (“but Jimmy I want you Jimmy here I come”) but this declaration of love can equally be interpreted as a desire for the union that comes with death. Death, love and the strong feeling that the poetic persona is trapped in himself are the themes that dominate Griffioen’s second collection.

Griffioen’s work is in some ways related to that of contemporaries Marieke Lucas Rijneveld and Daniël Vis. Like these poets, Griffioen’s poetry is a narrative poetry in which prose sections alternate with more lyrical passages. The vitality of language and images stand out in the work of all these three poets, and they all seem to have parted ways with the notion of the traditional collection. Their poetry creates an artwork, an installation continually offering different aspects of a particular theme.
© Henry Sepers (Translated by Astrid Alben)
Bibliography

on the summer’s day of frank o’hara

I’m here have no extras slump against the refrigerator

I have a recurring dream