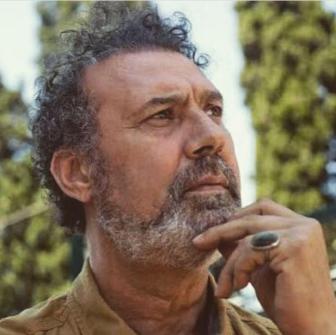 (Turkey, 1956)
Biography
The first thing that must be said about Salih Bolat’s poetry is it is not feather-light. It leaves a lasting impression in pure, fine poems which construct an edifice. While simple and lucid things may be the key to Bolat’s poetics, he manages to do this in a most intense manner. Yet, as one of our wisest poets, he knows that grandiose poems are never the truly impressive ones.

Bolat’s aesthetics are built on the conflict of the ordinary with poetic reality. The primary source of his poetry is the life he absorbs through extrospection and allows to mature in the oak barrels of his own experience. The poet then ferments this reality with something just beyond language and finally distills what we might term a brand new life. Introspection follows on from extrospection. The new life is not surreal. It is simply just beyond reality.

He calls this “underlining the void”.
The author of books of essays, poetry and criticism, Salih Bolat (1956, Adana) graduated from the Department of Social Politics at the University of Gazi (1980). He completed his doctorate at Hacettepe University. He has lectured at several universities in İstanbul and Ankara, on scriptwriting, creative writing and literature, and has served as a member of the editorial boards of the journals Koza, Petek, Yapıt and Yarın. His first literary work was a short story entitled “Çöpçü” [Garbage Man], which was published in the newspaper Yeni Adana (1975). He has also been published in journals such as Yeni Olgu, Türkiye Yazıları and Düşler. His poetry books include Yaşanan (“What Is Lived”, 1983), Bir Afişin Önünde (“In Front of a Poster”, 1986), Sınır ve Sonsuz (“Limit and Infinity”, 1988), Karşılaşma (“Encounter”, 1993), Uzak ve Eski (“Distant and Old”, 1995), Gece Tanıklığı, (“Witness to the Night”, 1999), Açılmış Kanat (“Spread Wings”, 2004), Yol Ayrımı (“Crossroad”, 2006)  Kanıt (“Evidence”, 2006) and Atların Uykusu (“Sleeping of The Horses”, 2014)
© Gökçenur Ç.