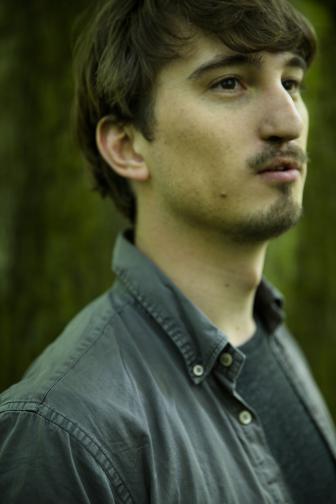 (The Netherlands, 1987)
© Koen Broos
Biography
Frank Keizer writes poems in which extremes meet. His poetry is distinctly contemporary, describing the existence of a young Dutch man in the early twenty-first century, and at the same time firmly embedded in literary tradition. Keizer also combines a colloquial-sounding tone with political-philosophic jargon. Using these building blocks, he construes an oeuvre and determines a position antithetical to the late-capitalist present time.
Keizer debuted in 2012 with the chapbook Dear world, fuck off, I’m going to play golf, in which an I-figure finds himself situated in a completely privatised present. In opposition to marketization and consumerism, the I-figure searches out places where community and solidarity continue to exist. It is telling that this chapbook was published by the Creative Commons project: in this way Keizer lets his readers share the poems for free.

In the following years, Keizer sought new stages for community building elsewhere. Together with fellow poet Maarten van der Graaff, he founded SampleKanon, a free online magazine with the motto ‘Magazines are societies’. In this publication, they present Dutch and foreign-language literary texts that might receive little attention elsewhere because of their innovative form and content.

His first print collection, Under Normal Circumstances, was published in 2015. In this book Keizer describes how a personal life is political, inspired by American authors such as Chris Kraus and Bruce Boone. He portrays the exhaustion and despair of a contemporary young man raised in the apolitical 1990s, who attempts to re-connect  and re-engage. Herman Gorter, an outspoken, early-twentieth century Marxist poet, provides inspiration in this struggle for change. Keizer’s second collection, Sweet Bad Thing (2019) continues along the course already set out: the characters find themselves on “a post-militant path to something that will become the future”.

because under normal circumstances Clarity about my existence FOR HERMAN GORTER I have remained behind in the night.
Poems
Poems of Frank Keizer

because under normal circumstances

Clarity about my existence

I have remained behind in the night.