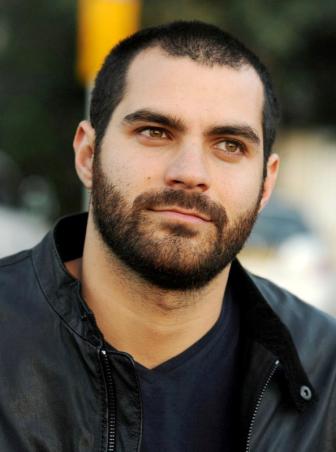 (Israel, 1987)
© Moti Kikion
Biography
Asked by an interviewer about the unusual title of his new book, Bli ma, poet Amichai Chasson answered, he said, the only way he knew how: “indirectly”. Chasson  told Orly Goldklang of Makor Rishon that “part of the book was written when we lived in Jerusalem and the rest after we moved to the plain [between the Judean hills and the coast], and since my work remains in Jerusalem I spend a lot of time on Route 1, and when asked where I live I begin to get into difficulties. It’s a feeling I know well. As a child I was often asked about my ethnicity and I didn’t know what to say…and afterwards... between religious and film schools... I have a strong feeling of ‘bli ma’ – two words.”

The words “bli ma” in Hebrew are part of an expression that may be found in the Book of Job (26:7): “tah-looey al bli ma” which means, roughly, suspended over emptiness or a void.

However, despite seeming to indicate a kind of placelessness, perhaps the poet is pointing to his ability to situate himself anywhere, a rare stance considering the polarities of Israeli society. As Revital Madar notes in her musings on Chasson’s first volume of poetry, published in 2015,

One feeling that arises from the book is of being positioned on the border between cultures, identities, sources and places. At the same time, this position on the border does not bring Chasson to any definite choices, and it is apparent that he is more interested in hovering rather than grabbing a spot on either side.

Indeed, in one poem the poet depicts himself as a child refusing to answer to either a first or last name, those that tag our identities:

A five-year-old boy alone in the water
not far from the shore. His parents call out his first
name, then his surname.

To which sides might he belong? Amichai Chasson, poet, film director, curator and screenwriter, currently working as artistic director of the Beit Avi Chai cultural center in Jerusalem, was born in the Tel Aviv suburb of Ramat Gan to a father from Tripoli, Libya, and a mother from New York City, the descendant of eastern Europeans. Therefore, he is both Mizrahi, as Jews from Arab and/or Moslem countries are known, and Ashkenazi, as central or eastern European Jews are termed, and a little bit American, an identity explored in a poem discussed here by Vivian Eden. He is a graduate of the Otniel Yeshiva, where advanced religious study and army service are combined, but he is also a graduate of the secular Sam Spiegel Film and Television School and the Mandel Leadership Institute. Chasson has worked as a journalist and culture critic for the papers Makor Rishon and Maariv, and as a speechwriter for the current Israeli President, Reuven Rivlin.

An editor of the religiously inclined poetry journal Meshiv Haruach, he is also a broadcaster for the public radio channel Kan Tarbut. His first book of poems, Talking with Home/Medaber eem ha bayit, was published in 2015 and won the Minister of Culture’s literary prize that year. In 2018, his second book, Bli ma, was published by the veteran Mossad Bialik Press, and his documentary film Yeshurun in 6 Chapters, about the iconoclastic Israeli poet Avoth Yeshurun, premiered at the 20th Docaviv International Documentary Film Festival in Tel Aviv.

LINK in English
Yeshurun in 6 Chapters

“My father was a fugitive Aramean”* (a poet in New York)