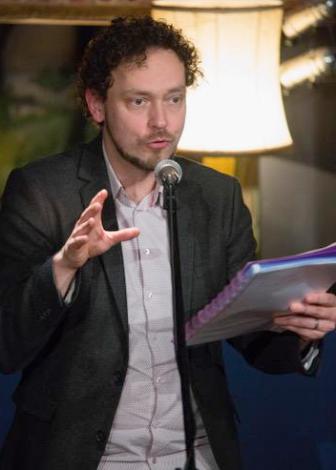 (Belgium, 1976)
© Willem Van Cauwenberghe
Biography
The work of Xavier Roelens is multifaceted. His poems take various forms – from songs to prose poems – and deal with diverse subjects. Although many critics claim that his poetry is therefore often inscrutable and difficult, his standing in the field is in fact high and reveals a vision of poetry as something anyone can learn to read or to write. This poet is one who definitely wants to share his poetry with a community.

To write Onze kinderjaren, Xavier Roelens asked 365 people about their earliest memory. He then took the resulting masses of facts, anecdotes, pop-culture references, childhood heroes, customs, habits, brands, and products that arose from those memories and transformed them into 77 poems that allow him to take the reader on a road trip through 20th-century history.

Yet this is no attempt at a historiography of facts and explanations, Roelens has chosen the medium of poetry after all, associatively pairing the countless references against the backdrop of history. Personal memory thus collide with historical fact, Roelens emphasizing that memories are always reconstructions that are colored by later experiences, not to mention that he also transforms them into poetry.

Roelens’ poetry is agile, sometimes introducing a new reference in a poem’s every line. It illuminates the abundance of history and personal memory, but as the possible connections between the two are not disclosed, the reader needs to take a different approach than when reading other poets: Roelens’ poetry should be experienced rather than read or interpreted. Not only is this liberating, it also shows how limiting explanations can be when we really want to discover the world around us.
© Patrick Peeters (Translated by Florian Duijsens )
In Roelens’ opinion we experience the poem during the reading process. Instead of looking for a set meaning determined by the poet, the poem is to be discovered. To achieve this effect Roelens uses formal techniques and traditions inherited from the avant-garde and combines them with ecocritical and other socially relevant themes. And so his poems often look like explosions of motifs that disseminate meaning in all possible directions while each poem or collection contains a kernel of meaning that keeps on making sense. In his latest collection, for instance, the theme of writing puts things into perspective.

For Onze kinderjaren (Our Childhood Years) Xavier Roelens asked 365 people for their earliest childhood memory and made 77 poems, titled by birth year, out of these memories,. The fragmentary and associative remembrances reveal a glimpse of twentieth century history, seen from the viewpoint of ordinary people, in varied literary forms. For example, in 1911:

and the man who lived for seven hundred years and the boy
who fell from the sky and the farmer who planted baked
potatoes and the hunchback who thought he was dead and
the fortune-teller who failed to recognise himself and the
musketeer who went looking for death and the footman with
a good memory and the miller who led the devil by the nose,
stand huddled against the outside wall by the drum fire. they
have fled their villages for brussels and take turns sneaking
up to the local monastery, where the americans have dropped
their food parcels.

Xavier Roelens has played an important role in the Belgian Poetry Slam scene and regularly performs his poems on stages all over the country. From 2009 until 2014 he was chief editor of the literary magazine Kluger Hans, which under his guidance became a free haven for local and international experimental literature. He organizes poetry workshops and coordinates the SchrijversAcademie, an organisation for creatrive writing. His second poetry collection was nominated for the Herman De Coninck Prize in 2012.