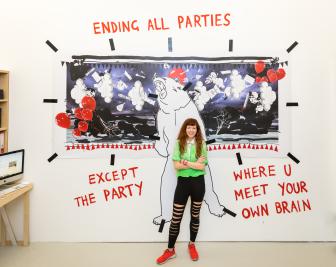 (United Kingdom of Great Britain and Northern Ireland, 1978)
© Heather Phillipson. Photo by Dan Weill
Biography
Heather Phillipson is an internationally-acclaimed poet and multi-media artist. Her work is challenging and inviting; combining bold aesthetics with complex questions. Her 2009 pamphlet, Faber New Poets 3, was followed in 2012 by NOT AN ESSAY (Penned in the Margins). Instant-flex 718 (Bloodaxe, 2013) was shortlisted for the 2013 Fenton Aldeburgh First Collection Prize and the Michael Murphy Memorial Prize. Phillipson also uses written and spoken poetry as elements of her wider artistic practice. In 2014 she was named a Next Generation Poet by the Poetry Book Society.

Phillipson’s poetry is bright and poppy. Her deadpan tone encompasses the whole gamut of registers, from hi-falutin’ to colloquial. Rhythms run in and out of her work like loose threads, rhyme schemes are adopted and discarded at leisure. There is a great sense of fun in the way she uses language:

Until then-then, SELENE space-icles! Off
into lunar landscape to be a god, ciao-ciao!
(‘Within the Cooling-off Period’)

Her work is “an attempt to represent, or to make or inhabit a site of excess, where there’s too much going on to be assimilated, and within that, things are not coherent. Coherence is a tyranny.”  These are attitudes broadly shared by several of Phillipson’s contemporaries in the UK, including Emily Berry, Nathan Hamilton, Sam Riviere and Jack Underwood, with whom she edited the Stop/Sharpening/Your/Knives anthologies. Surely one of the most influential poetry endeavours of recent years, the volumes are a house party of poetries, expanding rather than defining the borders of poetry.

Along with several of her fellow editors and contributors, Phillipson was chosen for the Faber New Poets scheme. Her pamphlet, the third in the series, is philosophical but fleshy. It opens with ‘German Phenomenology Makes Me Want to Strip and Run through North London’:

If it were winter I’d be intellectual, but it’s Tuesday
and I’d rather be outside, naked, than learned –

Physical urges impinge on intellectual queries and everyday acts are scenes of revelation. ‘Relational Epistemology’ puns on ‘relational’, locating the ideas of great thinkers in a family setting:

Phenomenology at the dinner table was not unusual.
My brother queried so-called ‘pepper’, so-called ‘ketchup’.

Food is just one way Phillipson’s poetry continually reminds us that we are creatures of consumption. Eating, drinking, sex; these acts are points of contact between the body and the world. Mouths, hands, genitals; all are both bridges and borders, a link and a limit.

We also consume words, and these too have a physical basis; Instant-flex 718 is a type of bookmaker’s glue. The collection continues from the pamphlet, preoccupied with the clash between thought and thing. We rarely make it past the title before the language starts stretching its triple-jointed limbs in several different directions. Phillipson’s work is concerned with the interplay of opposites. She can be both funny and serious, cynical and sincere – in fact she cannot be only one at a time, else the seesaw would cease.

Between the pamphlet and Instant-flex 718, Phillipson published NOT AN ESSAY; a series of musings which move between public and personal spaces – a nightclub, a swimming pool, a pair of trousers, a face:

A swimming pool is a plus-size bath, taken with people who are strangers. But a cinema, say, is whole body solids – crunchy teeth + breathing.
(p. 16)

Often referred to as ‘a text’, Phillipson states of NOT AN ESSAY, ‘I don’t know what it is, and I don’t really want to. Definitions can be so tedious’ (Quietus interview). It might be simplest to think of it as a ‘whole’ composed of ‘pieces’, since the tension between pieces and wholes is a preoccupation:

We are in malformed pieces, melted together. The overall impression is acceptable, but we don’t like to talk about the pieces.
(pg. 11)

Describing the work is difficult; every rule has exceptions. The elusive, fluctuating format makes for a different reading experience. The fragmentary pieces are free to suggest their own connections. We are given far more space, with wandering digressions rather than jarring juxtapositions.

Phillipson’s interested in “the self that’s always ex-pressing, dribbling out, whether we like it or not—what our bodies give away” (Rhizome interview) and for all its differences in approach, NOT AN ESSAY returns to Phillipson’s familiar themes:

While the saxophonist played the saxophone, a daub of real snot sucked in and out of his nostril.
(pg. 55)

Poetry is also a part of Phillipson’s wider artwork. She often uses a combination of video, objects, sculpture, audio, voice – both live and recorded – to create layered, immersive installations. She hosts videos online which combine moving and static images, music, sound and spoken word. ‘more flinching’ was created while Phillipson was Writer-in-Residence at the Whitechapel Gallery. Rooms were filled with mass-produced copies of the text on a rotating platform, accompanied by video, audio and objects. ‘Unflinching’ has become a cliché in blurbing art and writing; Phillipson is more interested in our messy, awkward reactions. The text, which has since been published separately in numbered parts, explores the tanglings of human and animal, real and virtual.

These dogs inhabit both the ‘real’ and virtual worlds. Our narrator is present as her dog is put down and reads online about the shooting of a police dog. The internet is a bombardment of text, images and ideas, which we consume:

Social media has become a site for experiencing as well as expressing emotions (‘all the feels’). ‘more flinching’ explores how these emotions are distinct from and interact with offline feelings.

The vertical columns look and read more linearly, and, split in to numbered parts, it teases at the idea of an overarching story. With a typical pun and typographic emphasis, it references the physical act of writing:

a:ldskjfa:lkdgjsa meaning
I’m so overcharged
that all I can do is literally slam
my hands/head/breasts against the keyboard.
('16')

The reader cannot fully access the sensations of the writer, but by reading they are involved, implicated, interrogated. On screen the poem demands interaction from the reader, the familiar, physical action of scrolling.

While I was writing this profile, it was announced that Phillipson’s sculpture with live video feed, ‘THE END’, will be featured on Trafalgar Square’s Fourth Plinth. It is a rare example of her work that has no textual or oral element, yet it is representative. The whipped cream and cherry are stylised and eye-catching; the fly is a self-conscious reference, another memento mori. Meanwhile the fly’s foil, a drone, will look back at the onlookers, filming the audience so they become pieces of the piece. It seems likely that Phillipson’s work will continue to become simultaneously subtler, brasher, more personal and more overtly political – in whatever form or medium it may reach us.