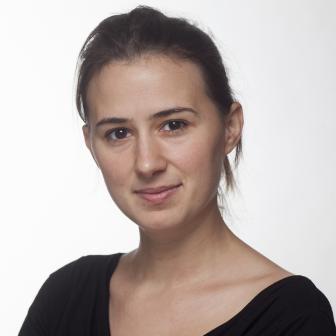 (Belgium, 1984)
© Tineke de Lange
Biography
Maud Vanhauwaert is a poet, writer, performer and drama teacher at the Royal Conservatoire Antwerp. Her debut collection Ik ben mogelijk (I am possible) was published in 2011 and won the Vrouw Debuut Prijs (Women’s Debut Prize). In 2014 Wij zijn evenwijdig (We are parallel) was published and won the Hugues C. Pernath Prize. The titular poem of this collection also won the Herman De Coninck Readers’ Prize 2015, voted as the most beautiful poem.

Vanhauwaert was a finalist of the WK Poetry Slam (2012) and of the Leids Cabaret Festival (2014). In 2013, she was part of the celebrities’ team of the Groot Dictee der Nederlandse Taal (The great Dutch language dictee) and ended up as the winner. She is one of the primary editors of the literary journal Dietsche Warande & Belfort (DW B) and has written columns for newspaper De Morgen.

Since January 2015, Vanhauwaert has been on tour performing her solo theatre program Het is de moeite in theatres and cultural centers throughout Flanders.
Maud Vanhauwaert already had won her spurs on the stage before notably debuting as a poet with her collection Ik ben mogelijk (I am possible). That stage experience is omnipresent in her new volume Wij zijn evenwijdig (We are parallel): the poet is used to taking into account her audience, be it listeners or readers. The blurb on this book’s cover actually is a reading guide that considers freedom of paramount importance: ‘You may read this book as a collection of poems, a winding story or a colorful procession of sad jokes.’

The design of the book also offers the reader complete freedom to seek her own way through the texts. Each page contains two text blocks, aligned to the left and to the right, which have been closed off from each by an underscore. It looks like the separate text blocks form a chain, in which the links are connected to each other, but not necessarily in a uniform manner or direction. As a matter of fact, one also notices that page numbers are absent in this book: readers appear to be free to set the sequence of the texts themselves.

Obviously the collection also contains elements that give the reader something to hold on to by suggesting relevant connections between the text blocks. The first element that functions this way is the frame story that hovers above the texts. The narrator seems to write down all sorts of images, recollections, fragments of discourse, and considerations during a long walk through a metropole. Considering the citations are in French, and the fact that a metro crosses the city, one could think of cities like Brussels or Paris.

Furthermore, there are returning themes, motifs and images that link different text blocks to each other: the recurring memories of the mother and the father; the images of (sexual) violence; or, in different variants, reappearing themes, such as the knob, suggest coherence. The repetition of sentence structures at the beginning of different text blocks (‘What shall we do with . . .’ ‘On the other hand . . .’ or ‘Look, here is . . .’) or the announcement of the narrator that she wants to write 10 poems, followed by the writing down of numbered text blocks, are rhetorical strategies brought into play to suggest coherence within a seeming chaos.

In addition, the reader is implicated in a character ‘she’ that regularly vents her opinion on what the narrator is writing. Those self-reflective moments produce a smile that keeps the irritation of the reader at a far distance.

Wij zijn evenwijdig is a complex collection that at a closer look gets more and more coherent, using rhetorical strategies that easily seduce the reader. Reader and poet, walking parallel, touch each other in infiniteness. Wij zijn evenwijdig confirms the talents of Vanhauwaert.
© Patrick Peeters (Translated by Regina Szwed dos Santos)
Bibliography

What to do with