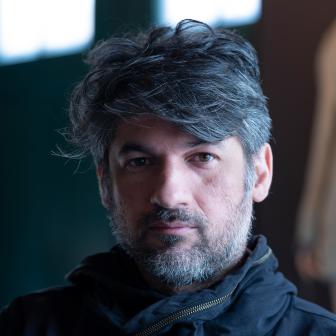 Ricardo Domeneck is one of today’s most prolific and versatile Brazilian poets. He nimbly switches between media, from collection or book to video, performance, music and visual arts. Domeneck describes himself as ‘an author from São Paulo, living in Berlin’, thus expressing his critical attitude to his homeland, which systematically and deliberately makes life difficult for the indigenous population of Brazil. At the same time, it distances him from Brazilian literature, which overlooks female authors and writers of colour. Domeneck is a sorcerer, a poet who maximises the power of his language. Philosophy and history blend with banal corporality and mundane observations in his glittering, almost tangible language. Domeneck’s poetry constantly pushes artificial boundaries and strains colonial reference frameworks, as well as normative attitudes to sexuality. Domeneck is particularly interested in the male body, whose delights he associates both tonally and thematically with the eroticism of language and the act of writing itself. In 2015 Perdu Amsterdam published a selection of his work in Dutch translation by Bart Vonck, with the title Het verzamelde lichaam (The Collected Body).

Ricardo Domeneck (Bebedouro, 1977) is one of the most prolific and versatile of a generation of younger poets from Brazil. He easily moves between a variety of media, including books, video, performance, music and visual art. Apart from being a poet, he also works as a critic and translator. His translations include Frederike Mayröcker, Jack Spicer, H.C. Artmann and many others, published on the regularly updated online literary review Modo de Usar (Manual), which he co-edits with Marilia Garcia and Angélica Freitas. He is one of the co-founders of the Berlin-based artist collective Gully Havoc, which hosts readings, performances and other live acts on a weekly basis. His anthology of Berlin-based international writers will be published with the collective in 2016. To date, he has published six books of poetry, the most recent one being Medir com as própias mãos a febre (Using one's own hands to measure the fever; 2015). Domeneck performs extensively at poetry festivals across the world and has been widely translated into other languages, including English, French, German, Spanish, Russian and Slovenian. A Dutch selection from his work was published recently in The Netherlands with Perdu, Amsterdam, as Het verzamelde lichaam (The collected body; 2015), translated by Bart Vonck.

From the abstract, dense lyrics that characterized his first book of poetry Carta aos anfibios (Letter to the amphibians) from 2005, Domeneck's work has gradually moved toward a more direct vocabulary, in which fragmentation and experimentation are pushed into the territory of the body – a shift that was completed with his 2012 volume Ciclo do amante substituível (Cycle of the substitutable lover). Consistent over the years has been the poet's highly critical relationship to his home country Brazil, which he chides for its systematic destruction – under the pretext of economic development – of indigenous populations, and to Brazilian literature, whose treatment of its woman and black writers he deplores. Strikingly, Domeneck does not identify as a Brazilian poet but once described himself as a ‘writer from São Paulo who lives in Berlin’. Artificial borders and colonial frames of reference are continually displaced in his poems, as are normative conceptions of sexuality. Philosophy and history intermingle with the banalities of everyday life, as do the personal and the political and many cultural registers, ranging from pop to poetry. Domeneck has a special interest in the male body, the pleasures of which he intimately associates, both tonally and thematically, with the eroticism of language and the act of writing itself. It harbors a utopian potential: for Domeneck, the body is a site of queer microsubversion, of a joyful revolt against the repressive structures of society.

LETTER TO THE FATHER

EARTH IN THE BODY

In which the poet celebrates his twenty-five-year-old lover