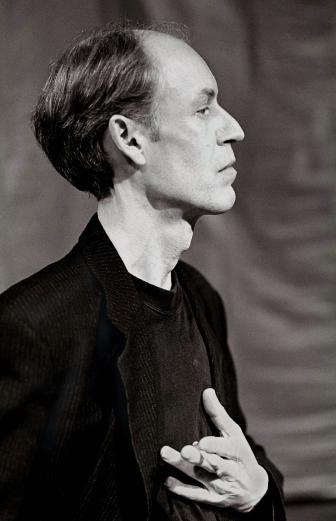 (The Netherlands, 1956)
© Roeland Fossen
Biography
Pieter Boskma is a cosmic poet and has been since his first collections: a wide panoply of verse full of ecstatic moments, metaphysical revelations, idyllic and elegaic flushes, his work contains it all. Cosmic poets are rather thin on the ground in the thrifty, Calvinist Netherlands and so immediately stand out, like Herman Gorter and Hendrik Marsman. Boskma, too, is an exceptional phenomenon; no poet in the Netherlands can be swept along so intensely by mysticism, magic and the overwhelming impact of reality.
Boskma is not a philosophical or psychological poet but a singer who is not averse to myth. When he is dealing with love and eroticism, for example, it is as if the whole world is at stake. He is also quite happy to talk about ‘the Girl’, a kind of prototype of the admired and desired woman, a real muse.

He is also an unbridled poet, and his poems are usually long and epic, full of fairy-tale and fantastic passages, and the protagonists seem to live on air and move magically through life and reality. In addition, nature plays a large, grand part in such lines as ‘A southerly storm rushed rejoicing across the pastures’ glitter’, which recall the past, both in the experience and in the language used. At the same time they give you a taste of another side to Boskma, for however convincing his lyricism about nature and mankind may be, he also has a sense of humour that occasionally cuts those exalted feelings and blazing forces down to size, bringing his stampeding thoughts to heel.

One of his most impressive collections is De aardse komedie (The earthly comedy; 2002), a huge ‘novel in verse’ that vies with the great poetry of the past. The death of his wife inspired the impressive mourning collection Doodsbloei (Dying bloom; 2010), followed by the ecstatic song of spring Mensenhand (Human hand; 2012), in which he brings a new wife, Hera, to life. In it, between the cosmic acts, he sits on a terrace and experiences ‘nothing but charm and pleasant travel blues’, indicating that even the Netherlands’ most unconstrained of poets has his more restrained moments. His 2014 collection Zelf (Self) was nominated for the VSB Poëzieprijs.

Boskma (Leeuwarden 1956), a Frisian by birth, studied various languages, East Asian art history and anthropology between 1977-1984. He made his debut in 1984 with the privately published collection Virus, virus, and at the end of the 1980s joined the Maximalists, a group of poets calling for more action in poetry. Since then he has published stories and novellas, in addition to his poetry collections.


On the poetry of Pieter Boskma

“Boskma is not only a Romantic poet, a poet of longing, but is definitely also socially engaged in his diatribes against the spirit of the age and the rise of fundamentalism.”

“You can’t help but be impressed by the traditional arsenal of imagery that Boskma deploys skilfully, drawing liberally on the reservoir of the funerary poetic tradition and Romanticism, while giving it his own twist. The poems just keep rolling out.”

Boskma’s poems have been translated and published in anthologies and reviews in China, the Czech Republic, France and the United States. In 2012 he was one of the poets participating in ‘The New York to Pittsburgh and Back Dutch Poetry Tour’.

In French:
Information on Boskma in French, including a translation by Daniël Cunin

A day like this that’s overcast and grey, ZELFPORTRET ALS ZELF LIGHTNING VISIT IMMANENT ZELFPORTRET You’re so quiet and soft that I

You’re so quiet and soft that I

Self-portrait as a dirty old man