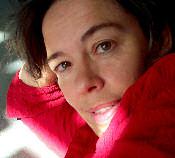 (Nederland, 1954)
© Herman van den Boom
Biografie
The poetry that Elma van Haren has published until now in six collections for adults (she also writes for children) is consistently ambiguous. The dominant tone is handled by the telling observations of someone who has a keen eye for what surrounds her: “obtrusive details constantly entice,” she writes in her latest collection Zacht gat in broekzak (Soft hole in trouser pocket). Her poems frequently find their point of departure in a moment that raises itself out of the jumble of the world, as when, for example, the sun catches the water, an unfamiliar breeze announces itself, or something breaks somewhere (‘SMASH-CLATTER’). These moments are not necessarily difficult to find, for “Alone a lot, you’re soon embraced by things”. The follow advice could be said to apply to her poetry: “Stream in; release; flow over; / Do something worthwhile. / Go Walking!”
But sharp observations are only the beginning of these poems. Putting them down on paper also means leaving these glorious moments behind; nevertheless, Van Haren’s poems do their level best to remain fairly close by. This means we get caught up in her writing process and her poems carry us along by means of their free associations and lucid tone of address. The transformation of an experience into language involves not only pleasure but melancholy too, melancholy concerning the distance between the observer and the sunlight, between the poem and that single moment.

So the undertone of this poetry is quite a bit less jubilant, rather it lets you hear the scuffling going on against the discord that walking and writing poetry also inevitably involve. In her poetry, two halves are always striving for supremacy and only a highly shaky balance is reached. Indeed, her second collection was called De Wankel (Shakiness), and here she stated that sometimes one can successfully “say hello and goodbye at the same time”. The unremitting confrontation between the sadness at saying goodbye and the pleasant surprise of saying hello is the space offered by the lively pages of Elma van Haren’s work.
© Johan Sonnenschein (Translated by John Irons)
Live poem
Watch the performance on the Poetry International festival of Elma van Haren

In Dutch:
Elma van Haren at the Koninklijke Bibliotheek (Royal Library, The Hague)