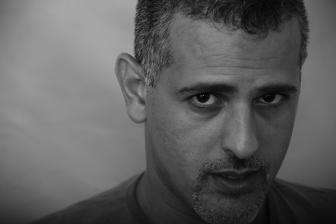 (Israël, 1975)
© Koby Ben Shushan
Biografie
Shachar Mario Mordechai was born in Haifa and grew up in Kiryat Bialik, a small northern suburb of the city; he lives in Tel Aviv. His middle name is that of his late paternal grandfather, who was Italian. He holds a B.A. in Communications and Political Science from Haifa University, and an M.A. in the latter from the same university. The author of three books of poems, Mordechai is a middle school teacher of civics, history, Hebrew and creative writing. In 2010 he won the Tel Aviv municipality's nationwide 'Poetry on the Roads' contest, which posts poetry in public places and funded his third book, with a poem from the viewpoint of the biblical Leah.
Mordechai is an explicitly political poet, who speaks in his own name, as the son of an Israeli soldier severely wounded in the Six Day War in 1967. As well, he has taken on the persona of the Tunisian street vendor whose self-immolation set off the Arab Spring. According to poetry columnist Ilan Berkowitz, he is a “brave artist” who, when he appears to be asking the question “who’s on our side,” that is, Israel’s side, in fact interrogates the meaning of “us”. In Mordechai’s case, this turns out to include the Palestinians. Critic Amir Becker, examining the way the poet balances poetry and politics, judges that Mordechai fulfills a condition voiced by Pablo Neruda that political poetry must be armed with “content and substance and intellectual and emotional richness”.
© Lisa Katz
BOOKS
In Hebrew
Mario’s Love for Rosa [Ahavat Mario l’Rosa] Sifryat Poalim, Tel Aviv 2001
History of the Future [Toldot ha atid], Even Hoshen, Raanana 2010
Who’s on Our Side [Mi be-inyan shelanu], Am Oved, Tel Aviv 2013

THE ONE WHO DOESN\'T KNOW HOW TO ASK

History of the Future