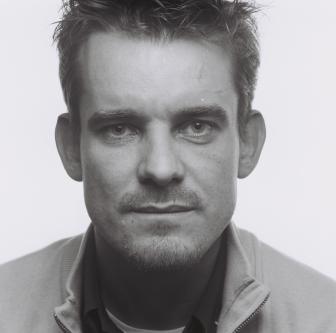 (België, 1964)
© Pieter Vandermeer
Biografie
Bart Moeyaert says he produces poetry only in driblets. More than as a poet, he is known in Flanders, the Netherlands and other countries as a writer of books for children and young adults. Even if Moeyaert is not primarily a poet, his much-admired oeuvre does reveal a decidely poetic turn of mind.
Some of his books have titles that sound like lines of poetry: ‘Love Is What We Don’t Understand’, and his beautiful, clear prose is full of sentences like ‘I feel you can hang the washing from my smile, it’s that wide.’

Moeyaert made his debut in 1983 with Duet With False Notes and has written some fifteen books for children and adolescents, books that many grown-ups also like to read. He often writes about the ‘grand themes’ of life, such as love, friendship, death, and kinship, but he knows how to clothe them in ‘small’ words. In Bare Hands (1995), two boys have killed a duck on New Year’s Eve; their fear, tangible throughout the story, is never expressed in words. What is essential in Moeyaert’s books is not what is there, but what is not. Atmosphere and feelings are often more important than actions or events. In Moeyaert, the plot often unfolds only in the final pages, and even then leaves room for the reader’s imagination.

Broere (2000), recently awarded the prestigious Woutertje Pieterse Prize, contains some thirty poetic and subtly humorous prose miniatures, written from the perspective of the youngest of seven brothers. Sober stories about dawdling over your food, about grandmother losing her marbles, about mother’s hands that collect the smells of the day, or about inventing things: ‘(.) and then I dreamt that I invented something that made people smile, and to my astonishment that invention was taller than the trees and bigger than the field and the woods around it. (.) I was the only one who looked around, and who discovered all sorts of things, whistling a tune as I went along.’ We wish Moeyaert many more discoveries, and lots more tunes to whistle.
© Janita Monna (Translated by Ko Kooman)
[Bart Moeyaert took part in the Poetry International Festival Rotterdam 2001. This text was written on that occasion.]